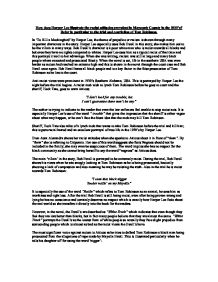 How does Harper Lee illustrate the racist attitudes prevalent in Maycomb County in the 1930's? Refer in particular to the trial and conviction of Tom Robinson.

How does Harper Lee illustrate the racist attitudes prevalent in Maycomb County in the 1930's? Refer in particular to the trial and conviction of Tom Robinson. In 'To Kill a Mockingbird' by Harper Lee, the theme of prejudice or racism is shown through many important characters in the story. Harper Lee especially uses Bob Ewell in this story; she makes him out to be the villain in many ways. Bob Ewell's character is a poor white man who is racist towards all blacks and believes they have no rights compared to whites. Harper Lee uses him as a typical racist of that time and this portrays it well to her advantage. When she was writing, racism was still at large and many black people where executed and prosecuted falsely. When the novel is set, life in the southern USA was even harder as racism had reached an extreme high and this is shown in the novel through the court case and Bob Ewell once again. Bob Ewell hates all black people and is a key factor in the false prosecution of Tom Robinson as he lies to the court. ...read more.

Also in the trial he is racist towards Tom Robinson: "I seen that black nigger Youder ruttin' on my Mayella" It is especially the use of the word "Ruttin" which refers to Tom Robinson as an animal, he sees him as worthless and right less. After the trial Bob Ewell is still being racist, even after being proven wrong and lying he has no conscience and certainly deserves no respect which is exactly how Harper Lee feels about the real world so she transfers it directly into the book for the readers. However, in the novel, the Ewell's are described as "White Trash" which indicates that even though they feel they are lots better than blacks, but in fact many people believe that they are almost the same. "White Trash" portrays the Ewell's as the lowest form of white people so actually they face slight prejudice from surrounding people which is almost as bad as the racist views the Ewell's have. The most significant voice against racism is Atticus as he tries to defend Tom Robinson a black man being prosecuted from the allegations of rape made by Mayella Ewell. ...read more.

Show you some of 'em if we see 'em." Harper Lee has done well to put across Dill's innocence towards Jem and Dolphus. This also shows an extreme anti-racist view from Dolphus in fact he has even had mixed race children, which was frowned upon by people in that generation. Tom Robinson is convicted in 'To Kill a Mockingbird' because he is black and he has no rights compared to white people of that time, Harper Lee uses the racism in reality directly in the book and puts it across using select characters, particularly Atticus and Bob Ewell who are against each other all the way through the book exactly how it would have been in real life in the 1930's, anti-racists versus racists and Harper Lee uses this well. Robinson goes on to die as he tries to escape after his false verdict and death sentence. Harper Lee's intension was to outline the fact that racism was a huge, horrible reality and she tried to use the anti-racist views of Atticus, Dolphus and Jem to inform people of how some people did fight racism. In particular, it is the voice of Atticus that truly shows strong anti-racist determination and that this is not a view which would have been greatly shared. ...read more.