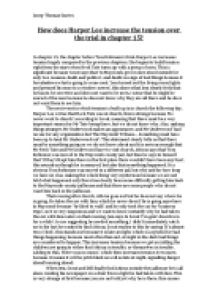 How does Harper Lee increase the tension over the trial in chapter 15?

﻿Jonny Thomas-Davies How does Harper Lee increase the tension over the trial in chapter 15? In chapter 15, the chapter before Tom Robinson?s trial, Harper Lee increases tension hugely compared to the previous chapters. She begins to build tension right from the start when Heck Tate turns up with a group of men. This is significant because Scout says that ?In Maycomb, grown men stood outside for only two reasons: death and politics?, and death is a sign of bad things because it foreshadows what is going to come next. ?Jem turned out the living-room lights and pressed his nose to a window screen?, this shows that Jem clearly feels that he has to be secretive and does not want to be seen, I sense that he might be scared of the men because he does not know why they are all there and he does not want them to see him. The next event in which tension is built up is in church the following day. Harper Lee writes that Heck Tate was at church, this is strange because ?He never went to church? according to Scout, meaning that there must be a very important reason for Mr Tate being there, but we do not know why. ...read more.

This increases tension because we get an inkling the children are going to either find Atticus in trouble, or themselves in trouble. Adding to this, ?there was no moon?, which then increases tension even more, because it means it will be pitch black as well as late at night, signalling danger ahead looming ahead. When Jem, Scout and Dill finally find Atticus outside the jailhouse he is all alone reading his newspaper on a chair from a light he had taken with him. This is very strange at first because you are not told yet why he is there, this causes tension because as the reader you are thinking to yourself that there has to be a reason he is there, he would not got to all the effort of bringing a light and a chair to read his newspaper out side the jailhouse when he could just read at home, so when Jem says ?He?s alright, let?s go home. I just wanted to see where he was?, you know being the reader that there has to be something else going on to explain Atticus?s whereabouts, so you sense that if the children left Atticus something with happen to him once they have left. ...read more.

This confirms to us that she really is in the wrong place at the wrong time because she does not know the men so this builds tension as we wait to see what will happen between the children and Atticus and the mob. Atticus asks Jem to take Scout and Dill home, to which Jem refuses; he wants to stick by Atticus, so when someone said ?you?ve got fifteen seconds to get ?em outa here?, its seems there will be hope for the children to leave without being hurt, and the tension slackens a bit, but on the contrary, Jem still refuses and puts himself and Scout and Dill in danger. This makes things really tense because the mob now can so very easily hurt any of them. When Scout singles out Mr. Cunningham, she is breaking mob rule, meaning that by isolating one person there is less threat, because the threat comes from the mob as a whole. So, Scout talking directly to Mr. Cunningham caused him to break mob rule and caused him to change his mind and leave, rather than hurt them. This then got rid of all that tension, however there is still a big sense of relief between the four characters, Jem, Scout, Atticus and Dill. ...read more.