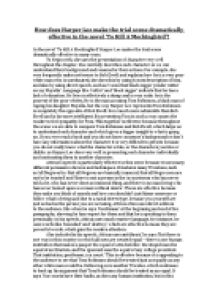 How does Harper Lee make the trial scene dramatically effective in the novel To Kill A Mockingbird?

﻿How does Harper Lee make the trial scene dramatically effective in the novel ?To Kill A Mockingbird?? In the novel ?To Kill A Mockingbird? Harper Lee makes the trial scene dramatically effective in many ways. To begin with, she uses the presentation of character very well throughout the chapter. She carefully describes each character so we can understand their background and reasons for their actions. For example, she very frequently makes reference to Bob Ewell and explains how he is a very poor white man who is uneducated, she does this by using Scouts description of him, and also by using direct speech, such as ?I seen that black nigger yonder ruttin? on my Mayella?. Language like ?ruttin?? and ?black nigger? indicate that he has a lack of education. He lives in effectively a dump and is very rude; he is the poorest of the poor whites. He is the man accusing Tom Robinson, a black man of raping his daughter Mayella, but the way Harper Lee represents Tom Robinson is completely the opposite of Bob Ewell. He is much more admirable than Bob Ewell and is far more intelligent. By presenting Tom in such a way causes the reader to feel sympathy for Tom. ...read more.

That institution, gentlemen, is a court.? This is effective because it is appealing to the audience to see that Tom Robinson should be treated just as equally as any other white man would be. Following on is another Tricolon, which continues to back up his argument that Tom Robinson should be treated as an equal. It says ?Our courts have their faults, as does any human institution, but in this country our courts are the great levelers, and in our courts all men are created equal.? The use of the antithesis and Tricolon together are so effective because they are both talking about America as a whole, and everyone living in America, and because most Americans are very patriotic they are likely to pick up on that, meaning they should realise if they hadn?t already that Tom Robinson deserves to be treated as they would treat any ordinary white person in America. At the end of his speech, Atticus says to the jury ?In the name of God, do your duty?, which is effective because again it is patriotic, and it also appeals to those who are religious. Atticus? speech is what stands out most in this scene, it does not try to change anybodies minds exactly, or give them reasons why Tom Robinson is ...read more.

After Harper Lee builds up all this tension over the trial, leaving the reader in suspense because they are not sure what will happen, when the jury announce the verdict, all the tension is blown out of the window, the reader is then just left astonished that he was found guilty, when in the end it seemed everyone must have realised that there was no real evidence to say that Tom Robinson did actually rape Mayella, because on cross examination everything seemed to be contradicted, meaning there was virtually no way Tom Robinson did ever commit the crime he was accused of. Although it was inevitable that Tom Robinson would end up going to prison, it is still a shock to find out that he does and it is overall very effective because it demonstrates just how racist the whites were, because if Tom Robinson was white, there would have been no question about it, he would have been found innocent, on the other hand of course he would never have even been accused in the first place because Although this is not the end of the novel, the trial scene gives the novel a spectacular climax before it has even finished. By doing this Harper Lee was including a very exciting part to the story, which then helped to resolve the issues of race for the most part of the novel. ...read more.