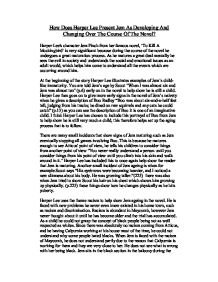 How Does Harper Lee Present Jem As Developing And Changing Over The Course Of The Novel?

How Does Harper Lee Present Jem As Developing And Changing Over The Course Of The Novel? Harper Lee's character Jem Finch from her famous novel, 'To Kill A Mockingbird' is very significant because during the course of the novel he undergoes a great maturation process. As he matures a great deal mentally he sees the evil in society and understands the social and emotional issues as an adult would, which helps him come to understand all the events which are occurring around him. At the beginning of the story Harper Lee illustrates examples of Jem's child-like immaturity. You are told Jem's age by Scout "When I was almost six and Jem was almost ten" (p.6) early on in the novel to help show he is still a child. Harper Lee then goes on to give more early signs in the novel of Jem's naivety when he gives a description of Boo Radley "Boo was about six-and-a-half feet tall, judging from his tracks; he dined on raw squirrels and any cats he could catch" (p.13) ...read more.

Another small incident of Jem ageing is when for example Scout says "His eyebrows were becoming heavier, and I noticed a new slimness about his body. He was growing taller."(225) there was also when Jem tried to show Scout his hair on his chest which shows him growing up physically. (p.225) these things show how he changes physically as he hits puberty. Harper Lee uses the theme racism to help show Jem ageing in the novel. He is faced with new problems he never even knew existed in his home town, such as racism and discrimination. Racism is abundant in Maycomb, however Jem never thought about it until he has become older and the trial has accumulated. As a child he could not grasp the concept of black people being not as well respected as whites. Since there was absolutely no racism coming from Atticus, and he having Calpurnia working at his house most of the time, he could not understand why some people hated blacks. ...read more.

he used "we" and he was referring to himself and Atticus. Jem was so engrossed and in full understand of the trial he felt as if he and Atticus were both doing it together. He is following the trial very closely, and when the verdict came in guilty Jem was gripping the rail so hard where he was sitting that his fists were turning white. These descriptions show the anger and rage inside Jem at that moment, for he knows all the evidence is in favour of Tom Robinson being innocent. These events to do with the trial contributed to Jem's maturation as he is starting to understand the things that are happening around him. In conclusion I feel Harper Lee has present Jem maturing over the course of the novel by starting showing him as a young childish boy gradually growing into an understand young man. This is very affective in the story as a reader you are intrigued to see him grow and see him resemble his role model father Atticus. ...read more.