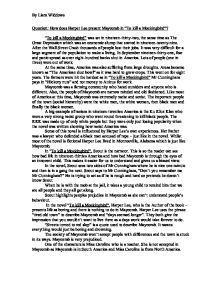 How does Harper Lee present Maycomb in &quot;To kill a Mockingbird&quot;?

Question: How does Harper Lee present Maycomb in "To kill a Mockingbird"? "To kill a Mockingbird" was set in nineteen-thirty-two, the same time as The Great Depression which was an economic slump that started in nineteen-twenty-nine. After the Wall Street Crash thousands of people lost their jobs. It was very difficult for a large segment of the population to make a living. In September nineteen-thirty-one, fear and panic spread as over eight-hundred banks shut in America. Lots of people (one in three) were out of work. At the same time, America was also suffering from large droughts. Areas became known as "The American dust bowl" as it was hard to grow crops. This went on for eight years. The farmers were hit the hardest as in "To kill a Mockingbird" Mr Cunningham pays in "Hickory nuts" and not money to Atticus for work. Maycomb was a farming community who hated outsiders and anyone who is different. Also, the people of Maycomb are narrow minded and old fashioned. Like most of America at this time, Maycomb was extremely racist and sexist. The important people of the town (social hierarchy) were the white men, the white women, then black men and finally the black women. ...read more.

An example of Scout being picked on for being a girl is where she says, "Jem told me I was being a girl, that girls always imagined things, that's why other people hated them so." Another example of sexism is in the courtroom where women aren't allowed on the jury and are asked to leave the room when a case gets too graphic as the men think that women won't be able to stand the gory details. In Maycomb, the whole place is not only sexist but racist and the justice system is corrupt as they will only accept white men on the jury. People in Maycomb use the word "nigger" quite often. Our modern society believes the word "nigger" is derogatory but in those days it wasn't said in an offensive way, this was just ingrained racism which was passed through the generations and society saw nothing wrong with it. An example of this is when Tom Robinson says to Atticus, "If you wee a nigger like me, you'd be scared", and when Atticus' nephew Francis calls him a "nigger lover". Atticus is different as he tells Scout off for using it. Bob Ewell assumes that Atticus won't really defend a black man like Tom Robinson and Bob's sure that he'll "win the court case" because he's white and Tom's black. ...read more.

An example of this is the fact that Scout can read before she can go to school and also teaches his children morals. In the court case and courtroom. Atticus shows that he is very against prejudice. He is a mouthpiece for Harper Lee's news particularly in his summing up speech. No-one in Maycomb likes the Ewell family as Atticus says, "the Ewell's had been the disgrace of Maycomb for three generations. None of them had done an honest days work in his recollection." Another person who hates prejudice is the Author Harper Lee and she is also very strongly against racism and sexism. In "To kill a Mockingbird", she presents the black community of Maycomb in a very positive way using positive imagery to show how respectful they are. Tom Robinson is a very good example of this. Characters like the Ewells are juxtaposed to Tom Robinson to show how bad and awful they are by using negative imagery. Harper Lee wants the world to change for the good to a more peaceful world. Maycomb is presented negatively in terms of prejudice nut Harper Lee shows the reader that it has potential to change. Maycomb is not too different to where Harper Lee was born and raised in Monroeville Alabama, a small city of about seven-thousand people. "To kill a Mockingbird" is Harper Lees only book ever to be published. ?? ?? ?? ?? By Liam Widdows ...read more.