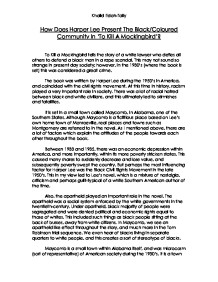 How Does Harper Lee Present The Black/Coloured Community In 'To Kill A Mockingbird'? To Kill a Mockingbird tells the story of a white lawyer who defies all others to defend a black man in a rape scandal. This may not sound so strange in present day society; however, in the 1930's (where the book is set) this was considered a great crime. The book was written by Harper Lee during the 1950's in America, and coincided with the civil rights movement. At this time in history, racism played a very important role in society. There was a lot of racial hatred between black and white civilians, and this ultimately led to skirmishes and fatalities. It is set in a small town called Maycomb, in Alabama, one of the Southern States. Although Maycomb is a fictitious place based on Lee's own home town of Monroeville, real places and towns such as Montgomery are referred to in the novel. As I mentioned above, there are a lot of factors which explain the attitudes of the people towards each other throughout the book. Between 1933 and 1935, there was an economic depression within America, and more importantly, within its more poverty stricken states. This caused many shares to suddenly decrease and lose value, and subsequently poverty swept the country. But perhaps the most influencing factor for Harper Lee was the Black Civil Rights Movement in the late 1950's. This in my view led to Lee's novel, which is a mixture of nostalgia, criticism and perhaps guilt-typical of a white Southern American author of the time. ...read more.

She shows them to kind and warm hearted, as well as hard working people. We hear towards the end of the story that Tom himself was a very hard working person, and works for Mayella Ewell without pay. After reading the novel, my view is that black people were viewed as being either stupid and child like, or evil human beings. The two black characters that play relatively major roles come across as being very friendly and very polite people. Calpurnia looks after the house and after the children, taking them in as 'her own'. However, as she is black, this leads to rumours about her private life coming out. She looks after the children so much that she even takes them to a black church, even though they are white. During her time at the Finch's residence, she has gained the respect of everyone around her, notably by Atticus, who refers to her as a 'faithful member of the family'. This shows how much she is trusted and valued by Atticus and the rest of his family. The other black character in the novel, Tom Robinson, is only seen for a short period of time during the novel, however when we do see him we find that he is as kind hearted a person as anybody. He is revealed as a polite and honourable person in court, and is always ready to help Mayella Ewell. A prime example of this is in the court scenes where upon being asked about whether he was paid for his services, he replied: ...'I was glad to do it. ...read more.

Therefore it perhaps is realistic that Black discontent can only be shown to a child who is breaking the rules of segregation that have been prescribed for black people by white people. A great example of the Black community's whole hearted welcome is when Jem and Scout first enter the church. Harper Lee describes the actions of the Black people in the church as: 'When they saw Jem and me with Calpurnia, the men stepped back and took off their hats; the women crossed their arms at their waists, weekday gestures of respectful attention.' These actions show us the gratitude of the Black community towards Atticus' and his family for what he has done for Tom Robinson, and that they would even go as far as to let his white children into a Black Church with them. Overall, the community of Maycomb is largely prejudiced towards the Black population, and even though there are a few people who acknowledge the Coloured community for what they are, the vast majority of people do not. Harper Lee shows this in various ways, as well as showing that the Black community is a loving, caring and very helpful group of people. The best example of this is in the Black church, as I have explained above. She also shows that the White people are racist, and that what goes around comes around in the way of Mayella Ewell and the rape scandal, and all in all, does an excellent job in presenting to us the Black community in Maycomb. ?? ?? ?? ?? Khalid Edah-Tally ...read more.