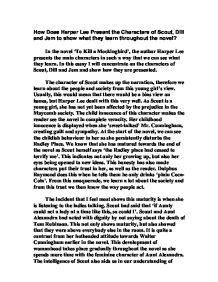 How Does Harper Lee Present the Characters of Scout, Dill and Jem to show what they learn throughout the novel?

How Does Harper Lee Present the Characters of Scout, Dill and Jem to show what they learn throughout the novel? In the novel 'To Kill a Mockingbird', the author Harper Lee presents the main characters in such a way that we can see what they learn. In this essay I will concentrate on the characters of Scout, Dill and Jem and show how they are presented. The character of Scout makes up the narration, therefore we learn about the people and society from this young girl's view. Usually, this would mean that there would be a bias view on issues, but Harper Lee dealt with this very well. As Scout is a young girl, she has not yet been affected by the prejudice in the Maycomb society. The child innocence of this character makes the reader see the novel in complete veracity. Her childhood innocence is displayed when she 'sweet-talked' Mr. Cunningham, creating guilt and sympathy. At the start of the novel, we can see the childish behaviour in her as she persistently disturbs the Radley Place. We know that she has matured towards the end of the novel as Scout herself says 'the Radley place had ceased to terrify me'. ...read more.

He is from a different area and because of this we have a contrast in beliefs. Like Scout he is immature at the start of the novel, after all he gave them 'the idea of making Boo Radley come out'. However, we see that he has dependence when he runs away. He was able to travel many miles to meet Jem and Scout and I would interpret this as maturity. Dill has also yet to be affected by the prejudice in societies. I think that the main thing that Dill learnt throughout the novel is to tell the truth. The example that I feel shows this the clearest is when he is talking about his father. When he writes he says that his new father was very kind and that 'they planned to build a fishing boat'. It was not long later when he admitted that 'they just weren't interested in me'. Dill had grown up and realised that telling the truth is the more mature thing to do. Dill also learns a great deal from Dolphus Raymond. All of the children learn about the society when he has to use drinking as a fa�ade to give society a reason for his allegedly incorrect lifestyle. ...read more.

We know that he does not realise the true ferociousness of the society. The indication of this from which I make this assumption on is on his optimism that Tom Robinson will be found innocent. After listening to the witnesses at the court case, he clearly says 'we've won it'. I believe that by living with Calpurnia and his visits to her church have blinded him from the true reality of the racist society. Similar to Dill he notifies the inequity of the decision has he tells Atticus that 'it ain't right'. The comment that really sums up all of the characters innocence is when Atticus states that 'so far nothing in your life has interfered with your reasoning process'. Atticus is saying that because they are young, the injustices of society have not affected them. Due to this the reader is able to trust the characters of Jem, Dill and in particular Scout to get very clear images of people and society. A fantastic writing technique. Scout has learnt to be dignified, Dill to tell the truth and Jem to stand by his morals. These three characters have been injected into the novel so not only they learn, but so does the reader, creating interest and making the novel more enjoyable to read. ...read more.