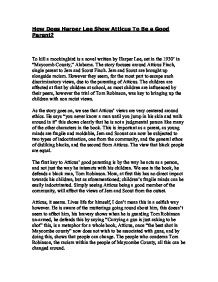 How Does Harper Lee Show Atticus To Be a Good Parent

How Does Harper Lee Show Atticus To Be a Good Parent? To kill a mockingbird is a novel written by Harper Lee, set in the 1930' in "Maycomb County," Alabama. The story focuses around Atticus Finch, single parent to Jem and Scout Finch. Jem and Scout are brought up alongside racism. However they seem, for the most part to escape such discriminatory views, due to the parenting of Atticus. The children are affected at first by children at school, as most children are influenced by their peers, however the trial of Tom Robinson, was key to bringing up the children with non racist views. As the story goes on, we see that Atticus' views are very centered around ethics. ...read more.

We see in the book, he defends a black man, Tom Robinson. Now, at first this has no direct impact towards his children, but as aforementioned; children's fragile minds can be easily indoctrinated. Simply seeing Atticus being a good member of the community, will affect the views of Jem and Scout from the outset. Atticus, it seems. Lives life for himself, I don't mean this in a selfish way however. He is aware of the mutterings going round about him, this doesn't seem to affect him, his bravery shows when he is guarding Tom Robinson un-armed, he defends this by saying "Carrying a gun is just asking to be shot" this, is a metaphor for a whole book, Atticus, once "the best shot in Maycombe county" now does not wish to be associated with guns, and by doing this, shows that people can change. ...read more.

Nearer the end of the book, we see how Atticus' ethical beliefs have rubbed off on his offspring. During the court case when Jem, Scout and Dill are watching the action from the black peoples balcony Jem rushes down to Atticus and exclaims "we've won haven't we!?" Jem overjoyed at the work his father had done to try and free Tom Robinson. Harper lee wants to show the reader how one person amongst hundreds of voices can be heard, he wants to show that everyone is equal, he shows this by segregating a character, and so one person can prove his equality. Simultaneously he shows how a single good parental influence can shape and mould a young mind in to thinking the "right" thing, but it also shows how a community can shape and mould a young mind to quite the opposite effect. Michael Tomlinson ...read more.