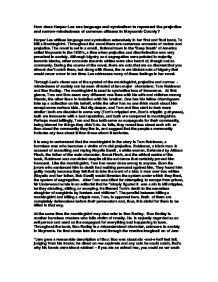 How does Harper Lee use language and symbolism to represent the prejudice and narrow-mindedness of common citizens in Maycomb County?

How does Harper Lee use language and symbolism to represent the prejudice and narrow-mindedness of common citizens in Maycomb County? Harper Lee utilises language and symbolism extensively in her first and final book, To Kill a Mockingbird. Throughout the novel there are numerous accounts of racism and prejudice. The novel is set in a small, fictional town in the 'Deep South' of America called Maycomb in the 1930's, a time when prejudice and discrimination was very prevalent in society. Although bigotry and segregation were pointed in majority towards blacks, other accounts towards whites were also heard of, though not as commonly. During the course of the novel, there are acts that are so discreet that you almost don't catch them, but along with those, there are blatant acts of bigotry that would never occur in our time. Lee addresses many of these feelings in her novel. Through Lee's clever use of the symbol of the mockingbird, prejudice and narrow-mindedness of society can be seen directed at two major characters; Tom Robinson and Boo Radley. The mockingbird is used to symbolise loss of innocence. At first glance, Tom and Boo seem very different: one lives with his wife and children among friends, the other lives in isolation with his brother. One has his fellow churchgoers take up a collection on his behalf, while the other has no one think much about him except some curious kids. ...read more.

Nobody sees what happens in the scuffle but at the end of it, Ewell is dead and Boo is carrying an unconscious Jem to the Finch house. Scout later implies by saying that if she told people that Boo killed Mr Ewell, it would be like shooting a mockingbird: "Atticus looked like he needed cheering up. I ran to him and hugged him with all my might. "Yes sir, I understand," I reassured him. "Mr Tate was right" Atticus disengaged himself and looked at me. "What do you mean?" "Well it'd be sort of like shootin' a mockingbird, wouldn't it?" The snowman that Jem and Scout made in front of Miss Maudie Atkinson's house one winter was another important example of symbolism used to show the prejudice and narrow-mindedness of society in Maycomb. There was not enough snow for the snowman so Jem used dirt for the foundation and then covered it with the snow that they did have. The snowman is symbolic in that Jem is trying to cover up the black man and show that he is the same as the white man. This implies the author's personal opinion about racism. It suggests Lee's belief that all humans, black or white, are equal. In contrast, the fire in Miss Maudie's house shows the prejudice of Maycomb. ...read more.

"Don't say nigger, Scout. That's common." Harper Lee skilfully applies this to show how far ahead Atticus was at this time. He knew that the word nigger was offensive to the blacks at this time. He showed the respect and common courtesy which was very rare of an affluent white male. Most of the blacks lived in the bad part of town, or the "slums." Even if they had the money, they wouldn't have been able to live in an upper class neighbourhood like the Finches. Blacks were considered dirty and unsanitary therefore, people didn't want them next to their houses. They feared that it would bring down their real estate value along with their reputations. Prejudice showed its face many times in To Kill a Mockingbird, and in some of those instances it showed itself being overcome. From prejudice caused by isolation against Boo Radley to racial prejudice against Tom Robinson, the book has displayed every aspect of how people can look through the window and see things completely narrow-minded. From the book, it can be perceived that Lee is referring to the progression of the USA, in a time where many civil rights movements were going on in America (the book was published in 1960). However still in our society today, in the year 2011, prejudice and narrow-mindedness can be seen everywhere we go and it will be a matter of time until this fades away. ...read more.