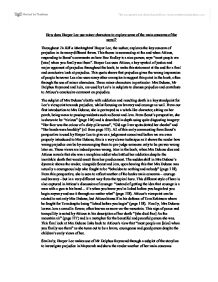 How does Harper Lee use minor characters to explore some of the main concerns of the novel? Throughout To Kill a Mockingbird Harper Lee, the author, explores the key concern of prejudice in its many different forms. This theme is summed up at the end when Atticus, responding to Scout's comments on how Boo Radley is a nice person, says "most people are [nice] when you finally see them". Harper Lee uses Atticus, a key symbol of justice and major opponent of prejudice throughout the book, to make this statement at the end for a final and conclusive look at prejudice. This quote shows that prejudice gives the wrong impression of people however Lee also uses many other examples to support this point in the book, often through the use of minor characters. Three minor characters in particular: Mrs Dubose, Mr Dolphus Raymond and Lula, are used by Lee's in subplots to discuss prejudice and contribute to Atticus's conclusive comment on prejudice. The subplot of Mrs Dubose's battle with addiction and resulting death is a key standpoint for Lee's viewpoint towards prejudice, whilst focusing on bravery and courage as well. ...read more.

This is another example of the narrator's personal prejudices similar to how Lee portrays Mrs Dubose. Furthermore, Scout is also proven to be wrong about Mr Dolphus Raymond who she thought to be a drunkard but who reveals himself to have a taste for Coca Cola but allows the folks of Maycomb to think badly of him because "it helps folks if they can latch on to a reason" (page 207). This is Harper Lee's way of further educating the reader as to the nature of prejudice by having Scout pose a simple question. In this response, Mr Raymond shows the reader that people do not approve of "his ways" - marry a black woman and having a series of mixed race children - but hide their racism by disproving of his seeming alcoholism to avoid confronting their real issues at hand. Whilst this point may shed a new light on Dolphus Raymond and "his ways", Scout takes a different view saying "I had a feeling that I shouldn't be here listening to this sinful man" (page 207) but continues to question him because "he was fascinating" (page 207) ...read more.

This is a very different technique to the previous two encounters with prejudice as it doesn't feature a positive inspiration or explore much more than prejudice; furthermore, Lee's use of a third person account of this prejudice allows the audience to see this as Scout would instead of from her direct perspective, accounting for her peronal prejudices. When discussing Boo Radley with Scout, Atticus comments "most people are [nice] when you finally see them". This is a general message that applies to all three of these situations: Mrs Dubose turns out to be a brave lady fighting for her life when Scout and Jem thought her to be an evil old woman, Mr Dolphus Raymond is shown to be a drunk who no morals but turns out to act that way to allow society to question his actions due to their racist prejudices and Lola isn't nice but Scout and Jem don't know anything of her and must judge her. Harper Lee uses these three subplots within 'To Kill a Mockingbird' to teach the reader some of the her key concerns of the book through direct and indirect encounters with intriguing characters. This is an effective technique as it connects key messages to the reader through Scout's personal questioning and misinterpretation and teaches the reader through Scout's actions the values within the book. ...read more.