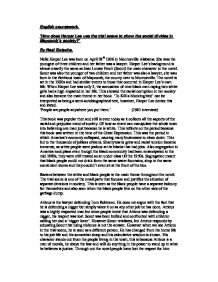 'How does Harper Lee use the trial scene to show the social divides in Maycomb's society?'

English coursework. 'How does Harper Lee use the trial scene to show the social divides in Maycomb's society?' By Neal Gotecha. Nelle Harper Lee was born on April 28th 1926 in Monroeville Alabama. She was the youngest of three children and her father was a lawyer. Harper Lee's background is almost exactly the same as Jean Louise Finch (Scout) the main character in the novel. Scout was also the younger of two children and her father was also a lawyer, she was born in the fictitious town of Maycomb, the county next to Monroeville. The novel is set in the 1930s and had similar events to those that occurred in Harper Lee's own life. When Harper Lee was only 5, the accusation of nine black men raping two white girls had a high impacted in her life. This showed the racial corruption in her society and also became the main theme in her book. 'To Kill a Mocking bird' can be interpreted as being a semi-autobiographical text, however, Harper Lee denies this and stated. 'People are people anywhere you put them.' (1961 interview) This book was popular then and still is even today as it collects all the aspects of the racial and prejudice mind of society. Of how an event can manipulate the whole town into believing one man just because he is white. This reflects on the period because this book was written in the time of the Great Depression. ...read more.

'He was the filthiest human being I have ever seen...His dad is right contentious' This shows the image in which other children see the Ewell family. Also we see the opinion of the children to Bob Ewell. Even though, the children may be young and immature, but their understanding of what goes on in their town is surprising. We see that his family ancestors have always managed to live on benefits, this makes them very unpopular and also does not appeal to the other families who have to work hard to support themselves. However when he accuses Tom Robinson, a black man, of raping his daughter, all the town's people were on Bob's side just because he was against a black man. Bob Ewell lives in an abandoned house where black slaves lived; when emancipation was in progress they moved out and preferred to build their own house elsewhere. This gives us evidence of how hypocritical Bob Ewell is. If he were against black people then he wouldn't live in the same house they lived in. In addition to this, Bob then gains power over the town's people by talking advantage of the trial. Who was a social outcast is now a powerful, manipulative man. We see a mob of men coming towards Atticus while guarding Tom Robinson in the town jail. Not knowing to Atticus, Scout Jem and Dill have also made their way to the jail because Jem is worried about Atticus's safety. ...read more.

He has been accused of raping Mayella Ewell and denies it. Tom Robinson represents all the racism and prejudice boiling up in the town of Maycomb. He is persecuted just because he is black. The people of Maycomb do not take into consideration that he is handicapped, as his left hand got caught in a cotton drill working for Dolophous Raymond. Even though at the trial we know that Tom Robinson is innocent the jury would rather see him suffer. This is also seen with the gallery. The gallery symbolises that gladiatorial event in which people enjoy people getting slaughtered and demanding blood. There by their reactions are controlled by the actions that take place. In the trial Bob Ewell controls the gallery as they are enjoying the event. Prejudice through out the novel is built up and mainly seen in the trial scene. All the social divisions are brought into context and is seen by using the main characters. Without Scout, we could not see what truly happens in the novel, that's why it is vital that Scout stays during the trial. Harper Lee use the trial scene to emit the image that the mocking birds in the title, are in danger from other means of racism, not only from the difference from skin colour, but from being different. This example is shown with Boo Radley. Both Boo Radley and Tom Robinson are portrayed as mocking birds as they are persecuted for bring different from every one else. ...read more.

This essay shows knowledge of the novel and makes some mature and perceptive comments. More quotes are needed and also analysis of the way Lee builds tension and uses dialogue to depict character. More discussion is needed on Atticus's role in the trial scene.
Also the essay sometimes resorts to merely describing events without any quotes and at times loses focus on the question.