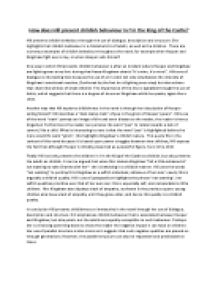 How does Hill present childish behaviour in &quot;I'm the King of the Castle&quot;?

Hills use of the word ?stain? portrays an image of dirt and even disease to the reader, the reader is hence disgusted. Furthermore the reader can perceive the word ?pee? to relate towards a lack of control, like a child. What is interesting to note is that the word ?pee? is highlighted before the more scientific word ?groin?, this highlights Kingshaw?s childish nature. This quote fits in the context of this novel because it is based upon power struggles between two children; Hill exposes the fact that although Hooper is initially presented as a powerful figure, he is still a child. Finally Hill not only presents the children in I?m the King of the Castle as childish, but also presents the adults as childish. ...read more.

Mrs Kingshaw also displays a lack of empathy, as shown in the previous quote: young children also have a lack of empathy until they grow older, and hence this quality is a childish quality. In conclusion Hill presents childishness or immaturity in the novel through her use of dialogue, description and structure. Hill emphasises childish behaviour that is associated between Hooper and Kingshaw, but also points out the adults are equally susceptible to such behaviour. Perhaps she is criticising parenting styles to show the reader the negative impact it can have on children. Her use of parallel structure is also ironic as it suggests that such negative qualities are passed on through generations. However, the parallel structure can also be reparative and predictable at times. ...read more.