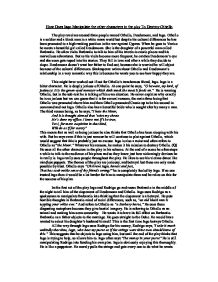 How Does Iago Manipulate the other characters in the play To Destroy Othello The play revolves around three people named Othello, Desdemona, and Iago. Othello is a soldier and a black man in a white mans world but despite his cultural differences he has been promoted to a high-ranking position in the war against Cyprus. When he goes to Venice he meets a beautiful girl called Desdemona. She is the daughter of a powerful man called Barbantio. He often visits Barbantio to talk to him of his travels to exotic places and his marvellous adventures. But as his visits become more frequent, he catches Desdemona's eye and she soon gets roped into his stories. They fall in love and after a while they decide to elope. Desdemona doesn't want her father to find out; because she is worried he will object because of the cultural differences. Shakespeare writes about Othello and Desdemona's relationship in a very romantic way this is because he wants you to see how happy they are. This might have worked out if not for Othello's treacherous friend, Iago. Iago is a bitter character. He is deeply jealous of Othello. ...read more.

One of the other people Iago manipulates Is Cassio; he is a good friend of Othello. He is a loyal, friendly and sociable man and as a consequence is much loved. Iago knows that his weakness is drink; Cassio also recognises that he cannot handle his drink and normally deliberately avoids alcohol so Iago convinces him to drink. He explains "If I can fasten but one cup upon him, with that which he hath drunk tonight already, He'll be as full of quarrel and offence as my young mistress' dog." He is trying to get him drunk so he will start a fight and ruin his reputation. All the better if it happens in front of Othello so he would have to demote him. Iago also knows that Desdemona will plead for Cassio because they are good friends. But what with the things Iago has already said, this makes her look guilty of the adultery that she is not even capable of. . The key to Iago's plan is a handkerchief. It is very precious to Othello explains, "That handkerchief did an Egyptian to my mother give: She was a charmer and could almost read The thoughts of people. ...read more.

After Othello humiliates Desdemona in public she goes to Iago. He comforts her but still persuades her to go to Othello to plead for Cassio. She has also fallen for Iago's trickery as she is of a na�ve nature. She goes to talk to Othello but he doesn't give her the chance to explain and that night he kills her in her sleep. Then Emelia enters she declares Desdemona's innocence, she tells him of the handkerchief "O thou dull moor, That handkerchief thou speak'st of I found by fortune and did give my husband; For often, with solemn earnestness More than indeed belonged to such a trifle- He begged of me to steal it." She has realised what a fool she has been. Iago and some of the other characters have come in to see what all the noise is about. Iago goes into a rage and he kills his wife. He is no longer being subtle, devious or cunning he has lost the game that he was playing. This is when the other characters see him for what he really is. Othello sees that he has killed his beautiful, loyal and loving wife. He commits suicide and dies in his her arms. This symbolises his deep affection for her and is another example of how Shakespeare loves to write romantically. ...read more.