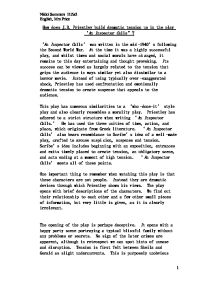 How does J.B. Priestley build dramatic tension up in the play 'An Inspector Calls&quot;?

How does J.B. Priestley build dramatic tension up in the play 'An Inspector Calls"? 'An Inspector Calls' was written in the mid-1940's following the Second World War. At the time it was a highly successful play, and whilst times and social morals have changed, it remains to this day entertaining and thought provoking. Its success can be viewed as largely related to the tension that grips the audience in ways similar yet also dissimilar to a horror movie. Instead of using typically over-exaggerated shock, Priestley has used confrontation and emotionally dramatic tension to create suspense that appeals to the audience. This play has numerous similarities to a 'who-done-it' style play and also clearly resembles a morality play. Priestley has adhered to a strict structure when writing 'An Inspector Calls.' He has used the three unities of time, action, and place, which originate from Greek literature. 'An Inspector Calls' also bears resemblance to Scribe's idea of a well-made play, crafted to arouse suspicion, suspense and tension. Scribe's idea includes beginning with an exposition, entrances and exits timely placed to create tension, an obligatory scene, and acts ending at a moment of high tension. 'An Inspector Calls' meets all of these points. One important thing to remember when watching this play is that these characters are not people. Instead they are dramatic devices through which Priestley shows his views. ...read more.

He is now viewed as with higher status and respect, yet the female's reputation is dashed. Sheila is expected to put up with her husband's actions, to be a good girl, yet Gerald is congratulated. There is no question of him being punished. Instead Sheila is expected to pick up their ruined relationship, and marry him. Mrs Birling's entrance during act two is also comical. It causes heightened tension as in contrast to the situation in the room, Mrs Birling is bold and defiant- ironic when compared to what is happening in the dining room. Sheila is perceptive and can see that Mrs Birling is yet another suspect on Inspector Goole's list. When Mrs Birling begins, '...we don't think we can help you much.' Sheila is adamant that her mother must stop then, as she is 'afraid you'll say or do something that you'll be sorry for afterwards.' Her panic and emotional outburst gives rise to tension and allows us to see her social responsibility in contrast to other members of the family who remain insistent that they have done nothing wrong. In Act Two many secrets are revealed for the first time. To start with, we find out about Gerald's affair and lies to Sheila. As if that is not bad enough, we also find out about the part Mrs Birling plays in Daisy/Eva's suicide. The scene becomes extremely tense when we find out about Eric's drinking problem, because whilst Gerald and Sheila already knew of it, Mrs Birling did not. ...read more.

They both represent the views felt by Priestley, that you have to change because of what has happened, you can't just forget and go on pretending. Someone, somewhere, has been badly treated by each of them. Maybe this is why the phone rings again. Mr Birling answers the phone and is clearly shocked by what he hears at the other end. 'A girl has just died- on her way to the Infirmary- after swallowing disinfectant. And the police inspector is on his way here- to ask some- questions-' This is a rather fitting ending and tension shoots straight up. The audience is left with many things to think about- this is exactly what Priestley had hoped to achieve. This play is all about social responsibility and by ending this way the audience has so many unanswered questions. 'An Inspector Calls' will be on their mind for a long while as they consider countless things such as who the inspector really was. Could he be the personification of morality and justice? Perhaps if everyone had accepted their shortcomings and progressed with lessons learnt the ending would be different. Throughout 'An Inspector Calls' Priestley has manipulated the audience using tension. He has made them think, caused them to question. People must learn lessons from their mistakes just as Sheila and Eric did before it's too late. Priestley is teaching us to be socially responsible. 'We don't live alone. We are members of one body. We are responsible for each other' ?? ?? ?? ?? Nikki Sommers 11Za2 English, Mrs Price 1 ...read more.