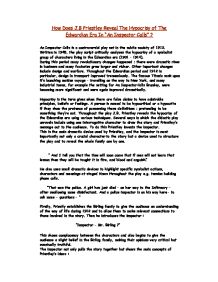 How Does J.B Priestley Reveal The Hypocrisy of The Edwardian Era In &quot;An Inspector Calls&quot; ?

How Does J.B Priestley Reveal The Hypocrisy of The Edwardian Era In "An Inspector Calls" ? An Inspector Calls is a controversial play set in the subtle society of 1912. Written in 1945, the play script critically analyses the hypocrisy of a symbolist group of characters living in the Edwardian era (1901 - 1914). During this period many revolutionary changes happened ; there were dramatic rises in business and many factories grew larger and richer. Other important changes include design and warfare. Throughout the Edwardian period and 1912 in particular, design in transport improved tremendously. The famous Titanic sank upon it's launching maiden voyage - travelling on the way to New York, and many industrial towns, for example the setting for An Inspector Calls Brumley, were becoming more significant and were again improved dramatically. Hypocrisy is the term given when there are false claims to have admirable principles, beliefs or feelings. A person is named to be hypocritical or a hypocrite if they show the pretence of possessing these definitions ; pretending to be something they're not. Throughout the play J.B. Priestley reveals the hypocrisy of the Edwardian era using various techniques. Several ways in which the didactic play unravels include using one interrogative character to draw the story and Priestley's message out to the audience. ...read more.

His character shows formality and routine of life ( typical marriage to Sheila ) although also sets double standards within the emblematic upper class family. He portrays another aspect of duplicity, which has again been tangled into the story. This is because he is allowed a mistress, however conversely to the situation with their own children, Mr and Mrs Birling both continue to respect Gerald and hold no grudges upon his actions, which are in themselves hypocritical. Gerald is hypocritical as he simply focuses on what he did right for Eva rather than what he did wrong. He believes, just as the other characters reflect their own actions upon themselves and other people, that what he did was insignificant and irrelevant. This symbolises the established routine that took place in the economic class system during the Edwardian era. Gerald's character is reaccepted into the family, however his relationships with Sheila and Eric change dramatically. Sheila despises what he has done, and realises the exact effect that not only his actions - but her failure in preventing them has caused. Eric becomes slightly jealous of his parent's ability to freely forgive Gerald although resents the way in which they 'deal' with what he has done. Every one of the characters show hypocrisy however at different levels - Sheila and Eric being the least hypocritical. ...read more.

Her character shows no individuality and represents the entire upper class including their outlook on life and their resistance to change. This resembles much of Priestley's work with the Fabien Society. In conclusion it is clear that J.B Priestley was very successful in revealing hypocrisy during the Edwardian era. He not only created social awareness about the moral issue of equality but put his ideas across to the audience in an established, tactful and didactic manner. Priestley uses a number of dramatic devices in harmony with representation to create an overall controversial view about people living in the unconventional setting of Brumley - 1912. The most important dramatic device is the inspector who continuously reveals the hypocrisy of each character, and challenges the attitude of all classes at the time. Hypocrisy is perhaps the most important feature of "An Inspector Calls" and influences the whole play. In my opinion Priestley reveals the hypocrisy in a defined, and controlled approach, using informative characters to show the truth of individuals living in the Edwardian era, and knowledge of later years to comply an outstanding review of hypocritical people. He has created a piece of literature which can, even today teach each and every one of us about hypocrisy and the general viewpoint of the majorities and minorities of life. ?? ?? ?? ?? ...read more.