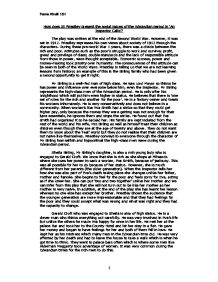 How does JB Priestley present the social issues of the Edwardian period in 'An Inspector Calls'?

How does JB Priestley present the social issues of the Edwardian period in 'An Inspector Calls'? The play was written at the end of the Second World War. However, it was set in 1912. Priestley expresses his own views about society of 1912 through the characters. During these pre-world War 1 years, there was a divide between the rich and poor. Attitudes such as the poor's struggle to work and survive; profit, greed and privilege of class; double standards and the lack of responsible attitude from those in power, were thought acceptable. Economic success, power and money-making took priority over humanity. The consequences of this attitude can be seen in both of the World Wars. Priestley is telling us that we are not learning lessons from history; an example of this is the Birling family who had been given a second opportunity to get it right. Mr Birling is a well-fed man of high class. He was Lord Mayor so thinks he has power and influence over everyone below him, even the Inspector. Mr Birling represents the high-class men of the Edwardian period. He is only after his knighthood which will put him even higher in status. He believes that there is 'one set of rules for the rich and another for the poor'. He is a factory owner and treats his workers inhumanely. ...read more.

He makes them all feel shocked and extremely guilty by his statements especially when he made his speech near the end of the play when he was about to leave: "...If men will not learn that lesson, then they will be taught it in fire and blood and anguish..." Through the inspector, we can see that Priestley wants to get across the socialist philosophy of the time that some people like the inspector himself believed in. He believed that everyone should look after everyone else and that everyone should live like a community and help everyone else socially. He says: "... and remember there are millions and millions of Eva Smiths and John Smiths, still left with us..." Here it can be seen that he still telling them that they can still try and improve the conditions and their attitudes towards the poor and less fortunate as there are still many of them. However the majority of them did not learn from this and faced the consequences. Edna is the maid of house. Priestley shows that the higher class kept maids. He shows us the poorer people of the country. She can be said to be very lucky as she has a place to live unlike many people. It is very unlikely that she would have got much to eat even they were having a celebration. ...read more.

I think that JB Priestley presents the social issues of the Edwardian period in this play through the characters and their way of speaking. He shows us what the upper class, rich business man of the time like Mr Birling were like during the time. He tells us about people like Mrs Birling who cannot tolerate rudeness, or that is what she thinks it is. She is someone who thinks that she is always right and she is too protective over her children who are at the age of being able to marry. We get to see what the younger generation of the time were like and how they reacted to situations like in the play itself. They are very different to their parents and are more social and more humane. We also get to see what people like the Inspector were like and their way of thinking. The inspector believed in a socialist philosophy and believed that everyone should look after everyone else, whether they are rich or poor. Priestley also presents the poorer social issues of the time. People like Eva Smith herself who was so easily sacked from her jobs for minute reasons; and also how girls like her turned to prostitution to earn some money for their bare needs. Then finally Priestly shows us people like Edna, who is the maid and how she is treated. He presents this all to us through the language, which the characters use, and how they react to situations and what they feel. H Fatma Khalil 11H 1 ...read more.