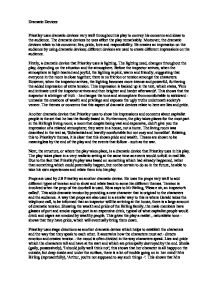 Dramatic Devices Priestley uses dramatic devices very well throughout his play to convey his concerns and ideas to the audience. The dramatic devices he uses affect the play remarkably. Moreover, the dramatic devices relate to his concerns: lies, pride, love and responsibility. He creates an impression on the audience by using dramatic devices; different devices are used to create different impressions on the audience. Firstly, a dramatic device that Priestley uses is lighting. The lighting used, changes throughout the play, depending on the situation and the atmosphere. Before the inspector arrives, when the atmosphere is light-hearted and joyful, the lighting is pink, warm and friendly, suggesting that everyone in the room is close together; there is no friction or tension amongst the characters. However, when the inspector arrives, the lighting becomes more intense and powerful, furthering the added impression of extra tension. This impression is backed up in the text, which states, 'Pink and intimate until the inspector arrives and then brighter and harder afterwards'. This shows that the inspector is a bringer of truth - he changes the tone and atmosphere from comfortable to awkward - unmasks the creations of wealth and privilege and exposes the ugly truths underneath society's veneer. The themes or concerns that this aspect of dramatic devices relate to here are lies and pride. ...read more.

This gives the play a realist , naturalistic tone - shows that they have pride, which will eventually bring them down. Priestley uses stage directions as another dramatic device which helps to establish the characters and the way that they speak to each other. It ascertains how the characters must act - directs emotion and creates tension - the mood is often divided in the way characters speak. Lies and pride which the characters tell and have at the start and which are principally destroyed by the end. Sheila (gaily, possessively), 'I should jolly well think not', this shows that her character is all happy on the outside, but deep inside and under the surface, there is a lot of trouble going on in her mind! Mrs Birling (reproachfully), 'Arthur, you're not supposed to say such things -'. This shows that Mrs Birling is insecure and doesn't want such subjects discussed in front of her children. Finally, on page nine, stage directions are used by Priestley as a way of building up tension: Eric (sitting down) Yes, please. (take decanter and helps himself.) Mother says we mustn't stay too long. But I don't think it matters. I left 'em talking about clothes again. Further down the page, after Birling has spoken to Eric about the representation of women's clothes, Eric gets interested and, (eagerly) ...read more.

There is tension as each blunder, contributing to Eva Smith's suicide is revealed. Another type of dramatic tension used by Priestley is that of climax. This is often called or known as a cliff-hanger, and as a reader, it makes you want to read on, or watching the play, it makes you want to see what happens. It is a very effective technique. J.B. Priestley uses this technique right at the end of act one, where it is left with the inspector saying, 'Well?'. The tension comes because it is about to be revealed, how Gerald contributed to Eva Smith's suicide. This is a very effectual to be used for plays, because when it is being acted there will be breaks between each act and therefore the audience are left wanting to know what will happen at the start of the next act. Finally, the last dramatic device that Priestley uses is style. He uses two styles throughout his play and they both create a different impression on the audience and he includes both of them for different purposes. Firstly, a detective thriller style: this is to do with revelations of how characters are involved in Eva Smith's death and the other, known as morality play. This relates to how much the characters are responsible for their actions and how much guilt and regret they express when the Inspector points it out to them. The style device relates directly with dramatic tension. ...read more.