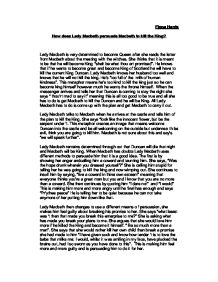 How does Lady Macbeth persuade Macbeth to kill the King?

Fiona Harris How does Lady Macbeth persuade Macbeth to kill the King? Lady Macbeth is very determined to become Queen after she reads the letter from Macbeth about the meeting with the witches. She thinks that it is meant to be that he will become King "shalt be what thou art promised". He knows that if he wants to become great and become King of Scotland he will have to kill the current King Duncan. Lady Macbeth knows her husband too well and knows that he will not kill the king. He's "too full o' the milk of human kindness". This metaphor means he's too kind to kill the king just so he can become king himself however much he wants the throne himself. When the messenger arrives and tells her that Duncan is coming to stay the night she says " thou'rt mad to say it" meaning this is all too good to be true and all she has to do is get Macbeth to kill the Duncan and he will be King. ...read more.

She then continues by quoting him "I dare not" and "I would" This is making him more and more angry until he final has enough and says "Pr'ythee peace" He is telling her to be quiet because he can not take anymore of her putting him down like that. Lady Macbeth then changes to use a different means of persuasion, she makes him feel guilty about breaking his promise to her. She says "what beast was 't then that made you break this enterprise to me?" She is asking what has made you break your plans to me. She argues that she would love him more if he killed the King and become it himself. " Be so much more than a man". She says that she would rather kill her own child than break a promise she had made to him "I have given suck and know how tender 't is to love the babe that milks me: I would, whilst it was smiling in my face, have plucked the brains out, had I so sworn as you have done to this". ...read more.

She is saying it' going to be easy I will get the guards drunk on wine so you can kill Duncan when they are asleep and when they wake in the morning with the daggers beside them they will be blamed. Macbeth is a powerful character otherwise he would not lead the Kings army. He is also ambitious and pleased by the witches' prophecy that is quickly fulfilled about becoming Thane of Cawdor. He writes to Lady Macbeth telling her about this and also that he will become king. Lady Macbeth shares the ambition and seizes the opportunity presented by the Kings visit. She needs to persuade Macbeth to see the plan through and by the end of scene seven Macbeth has been persuaded to kill the king by calling him a coward and making him feel guilty, . Lady Macbeth will get what she wants and that is to become queen. She has used her powers of persuasion to get her way. She flirts and plays with Macbeth to get him to change his mind as well as using powerful language. ...read more.

A generally good essay that considers the use of language and form; although the focus is on the start of the play, prior to Duncan's death, it is important to reference other parts of the play; in this case the fact that Lady Macbeth's strength and power over her husband does not last and her character weakens as the play progresses.