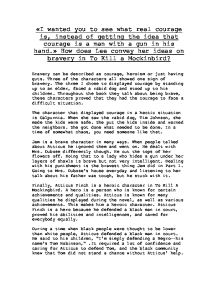 «I wanted you to see what real courage is, instead of getting the idea that courage is a man with a gun in his hand.» How does Lee convey her ideas on bravery in To Kill a Mockinbird?

Bravery can be described as courage, heroism or just having guts. Three of the characters all showed one sign of bravery. The three I chose to displayed courage by standing up to an elder, faced a rabid dog and stood up to his children. Throughout the book they talk about being brave, these characters proved that they had the courage to face a difficult situation.

The character that displayed courage in a hectic situation is Calpurnia. When she saw the rabid dog, Tim Johnson, she made the kids were safe. She put the kids inside and warned the neighbors. She got done what needed to be done. In a time of somewhat chaos, you need someone like that.

Jem is a brave character in many ways. When people talked about Atticus he ignored them and went on. He dealt with Mrs. Dubose differently though. He cut the tops of her flowers off. Doing that to a lady who hides a gun under her layers of shawls is brave but not very intelligent. Dealing with his punishment is the bravest thing Jem did in Part 1. Going to Mrs. Dubose's house everyday and listening to her talk about his father was tough, but he stuck with it.

Finally, Atticus Finch is a heroic character in To Kill A Mockingbird. A hero is a person who is known for certain achievements and qualities. Atticus is known for many qualities he displayed during the novel, as well as various achievements. This makes him a heroic character. Atticus Finch is a hero because he defended a black man in court, proved his abilities and intelligences, and cared for everybody equally.

During a time when black people were thought to be lower than white people, Atticus defended a black man in court. He said to his children, "I'm simply defending a Negro--his name's Tom Robinson," .It required a lot of confidence and caring for Atticus to defend Tom, and the black community knew that Tom did not stand a chance without Atticus' help. They respected him and looked to him as a hero. They showed this when they stood up for him in the courtroom. Reverend Sykes said to Scout in the courtroom, "Miss Jean Louise, stand up. Your father's passin," .The entire group of black people who were there stood up for him. Also, the parishioners at Calpurnia's church made Jem and Scout feel welcome when they visited their church. This showed that the black people also respected Atticus' family. If Atticus were just trying his best in a difficult circumstance, then he would not be as respected as he was by the black community. The black people greatly acknowledged the qualities that Atticus displayed by defending Tom and looked to him as a hero because of these qualities.

Throughout the novel, Atticus proved his numerous abilities and intelligences. He had achieved the nickname of "One-Shot Finch" because he was always the deadest shot in Maycomb. He saved the town from a rabid dog by shooting it with one shot. Jem and Scout were amazed when their neighbour, Miss Maudie, told them, "The very idea, didn't you know his nickname was Ol' One -Shot when he was a boy," . His children thought Atticus could not do anything, until Miss Maudie explained to them that he was also the best checker player in Maycomb and that he knew how to play a Jew's harp. Atticus also explained many things and taught many lessons to his children as they traveled the journey of growing up. It is proven that Scout listened to her father's advice when she said, "As Atticus advised me to, I tried to climb into Jem's skin and walk around in it,". She took his advice because she knew it would work. She knew that Atticus was always right. Again, if Atticus were simply trying his best in a hard situation, then he would have had a harder time explaining life's problems to his children. Jem and Scout looked up to Atticus, and in their eyes, he was a true hero.

The acts displayed by Calpurnia, Jem and Atticus showed they all had great courage no matter what the situation. They stood up to many different situations and succeeded. There are many characters that showed courage in To Kill a Mockingbird.