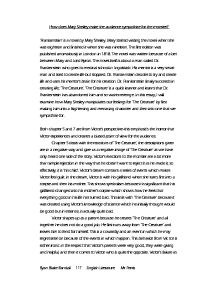 ‘Frankenstein’ is a novel by Mary Shelley. Mary started writing the novel when she was eighteen and finished it when she was nineteen. The first edition was published anomalously in London in 1818. The novel was written because of a bet between Mary and Lord Byron. The novel itself is about a man called Dr. Frankenstein who goes to medical school in Ingolstadt. His mentor is a very smart man and tried to create life but stopped. Dr. Frankenstein decides to try and create life and uses his mentor’s brain for his creation. Dr. Frankenstein finally succeeds in creating life; ‘The Creature’. ‘The Creature’ is a quick learner and learns that Dr. Frankenstein has abandoned him and so wants revenge. In this essay, I will examine how Mary Shelley manipulates our feelings for ‘The Creature’ by first making him into a frightening and menacing character and then into one that we sympathise for.

Both chapter 5 and 7 are from Victor’s perspective-this emphasis’s the horror that Victor experiences and creates a biased point of view for the audience.

Chapter 5 deals with the reactions of ‘The Creature’, the descriptions given are in a negative way and give us a negative image of ‘The Creature’ as we have only heard one side of the story. Victor’s reactions to the monster are a bit more than simple rejection in the way that he doesn’t want to reject it as he made it, so effectively; it is ‘his child’. Victor’s dream contains a series of events which makes Victor feel guilt. In the dream, Victor is with his girlfriend when she turns first into a corpse and then his mother. This shows symbolism because it is significant that his girlfriend changed into his mother’s corpse which shows how he feels that everything good in his life has turned bad. This links with ‘The Creature’ because it was created using Victor’s knowledge of science which he initially thought would be good but in essence, is actually quite bad.

Victor shapes up as a parent because he creates ‘The Creature’ and all together he does not do a good job. He first runs away from ‘The Creature’ and leaves him to fend for himself. This is a cowardly and an event in which he may regret later on because of the events in which happen. This behavior from Victor is rather ironic in the respect that Victor’s parents were very good, they were giving and helpful, and then it comes to Victor who is quite the opposite. Victor’s failure as a parent suggests that we might start to have sympathy for ‘The Creature’ because it deserves a good life; after all, it has done nothing wrong. Because of this, we take pity for ‘The Creature’ and take his side whilst slightly rejecting Victor’s side of the story.

In Chapter 7, ‘The Creature’ is built up as ‘the murderer’ due to the words and phrases that Victor uses to describe it. These words build up as an image in our head and it gets stronger and stronger as Victor continuously describes and talks about ‘The Creature’ negatively. Whilst this image builds up, we do not realise that this is only part of the story and ‘The Creature’ is yet to tell his side. Justine’s execution makes us dislike ‘The Creature’ a little more because we know that Justine did not commit such a crime and so it makes us think about ‘The Creature’ even more negatively. Victor feels responsible for William’s murder and Justine’s execution because he created ‘The Creature’, he let it loose in the world, and he abandoned it, therefore it is his fault and he should feel every bit of guilt. If Victor hadn’t of created ‘The Creature’ then it wouldn’t have started the whole series of events and several lives could have been saved.

Chapters 10, 11, 12 and 16 are from the creature’s perspective – this emphasises the plight of the creature and challenges the perspective created by Victor. Our initial view of ‘The Creature’ is radically challenged and our sympathy for Victor undermined. ‘The Creature’s story begins to challenge the reader’s views of him because it is the first point where he gets to tell his story in full, he explains in detail his situation and so we understand him.

“All men hate the wretched; how, then, must I be hated, who am miserable beyond all living things!”

When Victor agrees to hear ‘The Creature’s story, there is slight shock from ‘The Creature’ as well as the reader because this is the first time that Victor has accepted his parent responsibilities and has decided to listen to his story.

“For the first time, also, I felt what the duties of a creator towards his creature were, and that I ought to render him happy before I complained of his wickedness.”

‘The Creature’ appeals to Victor as a parental figure because, so far, he has not done any such parenting even though it is his creation.

“Do your duty towards me, and I will do mine towards you and the rest of mankind.”

By saying this, ‘The Creature’ makes it clear that if Victor does not act as a parent figure to him, and does not do his duties, then he will continue to cause havoc with mankind.

In chapters 11 and 12, ‘The Creature’ is depicted almost as a child experiencing the world. He is discovering everything and asks many questions about everything just as a child would. For example he does not know what the moon is and so describes it as “a radiant form rise from among the trees.” He also does not know birds and describes them as “little winged animals.” Another example of childlike behaviour is “In my joy I thrust my hand into the live embers, but quickly drew it out again with a cry of pain. How strange, I thought, that the same cause should produce such opposite effects!” This example is something that a child would do as they do not understand the consequences of it. It may draw slight sympathy from the reader because ‘The Creature’ is innocently exploring the world however does not have a parent their to guide and help him.

‘The Creature’s gentler side is shown in the way that he was learning and interacting with the De Lacey’s. At this point in the story, the reader may think badly of ‘The Creature’ however this may be changed by ‘The Creature’s actions during this chapter. At first he steals from the family however he soon stops when he realises what condition the family are in. He describes it as:

“It was poverty and they suffered that evil in a very distressing degree.”

After he realises this, he helps the De Lacey’s by collecting fire wood for them which is a great help to them.

“I found that the youth spent a great part of each day in collecting wood for the family fire, and during the night I often took his tools, the use of which I quickly discovered, and brought home firing sufficient for the consumption of several days.”

Learning is important to ‘The Creature’ and makes him who he is. It lets him express his feelings and be himself. He uses ‘I’ a lot which was also important to the romantics, (Mary Shelley was part of) it made characters be more human like.

When ‘The Creature’ first sees his reflection, he is horrified. He describes himself as feeling

“filled with the bitterest sensations of despondence and mortification”. He also said

“Alas! I did not yet entirely know the fatal effects of this miserable deformity”.

This shows how he finally realises the reason for his poor treatment by other villagers. The hatred shown by ‘The Creature’ of himself makes the reader sympathise for him even more.

When ‘The Creature’ decides to meet with the Grandfather, the reaction of the De Lacey’s is not good. They misread the situation and this that he is attacking the Grandfather and so they attack and chase him off. We then sympathise for ‘The Creature’ because he is innocent and he even begins to question his life.

“Cursed, cursed creator! Why did I live?”.

In chapter 16, the reader is expected to sympathise for William because he was murdered, however, Shelley twists the reaction of the reader into sympathising for ‘The Creature’ because he has done nothing wrong, he is innocent, he didn’t choose to be born nor did he choose to look the way he does and yet William, on several accounts, makes horrible comments about ‘The Creature’, leading us to feel sorry for him. William calls him a

“monster” and an “Ugly wretch!”. He also says “You wish to eat me and tear me to pieces.” William calls him an ‘ogre’.

These comments are harsh and so we sympathise for the innocent ‘Creature’. His actions can be partially ‘excused’ because he is innocent and yet he is being treated wrongly.

‘The Creature’ feels emotions that are humanlike such as he wants a lady friend. This shows his likeness to humans and that his behaviour is that similar to a human.

In this essay, I have analysed how Mary Shelley twists the way the reader thinks and feels towards the current situation. An example of this is that when we first hear about the murder of William, we are disgusted by what ‘The Creature’ has done, however, our reaction is quickly changed by Shelley and we sympathise for ‘The Creature’. This is an example of how she manipulates the reader and changes the way they think.

To conclude, Mary Shelley makes us sympathise for ‘The Creature’ because it was abandoned when first created, it was left to fend for itself and so it didn’t really have a lot of choice in life, it was automatically labeled as ugly and dangerous and so altogether, it has had a tough life with no support or a simple chance at a normal life.