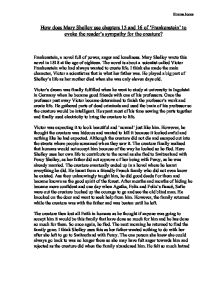 How does Mary Shelley use chapters 15 and 16 of Frankenstein to evoke the readers sympathy for the creature?

How does Mary Shelley use chapters 15 and 16 of 'Frankenstein' to evoke the reader's sympathy for the creature? Frankenstein, a novel full of power, anger and loneliness. Mary Shelley wrote this novel in 1818 at the age of eighteen. The novel is about a scientist called Victor Frankenstein who had always wanted to create life. I think she made the main character, Victor a scientist as that is what her father was. He played a big part of Shelley's life as her mother died when she was only eleven days old. Victor's dream was finally fulfilled when he went to study at university in Ingolstat in Germany when he became good friends with one of his professors. Once the professor past away Victor became determined to finish the professor's work and create life. He gathered parts of dead criminals and used the brain of his professor so the creature would be intelligent. He spent most of his time sewing the parts together and finally used electricity to bring the creature to life. Victor was expecting it to look beautiful and 'normal' just like him. However, he thought the creature was hideous and wanted to kill it because it looked awful and nothing like he had expected. Although the creature did not die and escaped out into the streets where people screamed when they saw it. The creature finally realised that humans would not accept him because of the way he looked so he fled. ...read more.

Chapters fifteen and sixteen focus mainly on the creature and his feelings. It tells us about how he lived and survived while living in the hovel, what he got up to when he finally left and what made him kill all of Victor's friends and family. What provoked him and how he was feeling and the thoughts he had while he proceeded through his journey to find Victor. These two chapters are important to the whole novel as it gives us a clearer insight to the creature's life, which makes us feel sympathy and understanding towards him. Shelley encourages the reader to have sympathy towards the creature, as she does not give him an identity by calling him 'creature' through the novel. She does not name him. He has characteristics of someone who has not been introduced to the world and his surroundings. He does not know what is right and wrong, good or evil. When he discusses the books he found he says, "I read of men concerned in public affairs, governing and massacring their species. I felt the greatest ardour for virtue rise within me, and abhorrence for vice, as far as I understood the signification of those terms." This shows that the creature has feelings for humanity. However, these feelings change throughout the extract as he finds humans are not what he originally thought. ...read more.

This makes us as the reader feel pity towards the creature as he is excepted if people cannot see his face but is hated and thought of as disgusting if they see him. People do not give him a chance and that is why the reader feels sorry for the creature. Shelley uses negative vocabulary to evoke the sympathy from the reader. Shelley uses many strong words in the same sentence such as desolation, enemy, death, despair, miseries, torment, and destroy. We feel sorry for the creature as it is usually describing him or what he is doing. By making the creature, look bad the reader becomes sympathetic towards him. Shelley also uses dramatic techniques such as pathetic fallacy. This is when the weather mirrors the emotions or mood of the character. Mary Shelley personifies the weather. Sometimes it is 'friends' with the character but sometimes it is the creature's 'enemy'. Examples of this are, "as the night advanced a fierce wind arose from the woods" This shows that the character is in a bad mood or unhappy as the wind are fierce. When you are angry, you become aggressive and can be fierce towards others. It is also night time which shows that it is dark. The dark symbolises death or distress in a characters feelings. "My chief delights were the sight of flowers, the birds and all the gay apparel of summer." When it is light, sunny and summery people tend to be happy and enjoying themselves. Emma Jones ...read more.