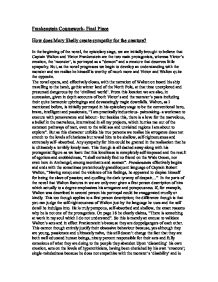 How does Mary Shelly create sympathy for the creature?

Frankenstein Coursework- Final Piece How does Mary Shelly create sympathy for the creature? In the beginning of the novel, the epistolary stage, we are initially brought to believe that Captain Walton and Victor Frankenstein are the two main protagonists, whereas Victor's creation, the 'monster', is portrayed as a "demon" and a creature that deserves little sympathy. But, as the novel progresses we begin to develop an understanding with the monster and we realise he himself is worthy of much more and Victor and Walton quite the opposite. The novel opens, and effectively closes, with the narration of Walton on board his ship travelling to the harsh, gothic winter land of the North Pole, at that time unexplored and presumed dangerous by the 'civilized world'. From this location we are also, in succession, given in depth accounts of both Victor's and the monster's pasts including their quite harmonic upbringings and devastatingly tragic downfalls. Walton, as I mentioned before, is initially portrayed in his epistolary stage to be the conventional hero, brave, intelligent and passionate, "I am practically industrious- painstaking- a workman to execute with perseverance and labour:- but besides this, there is a love for the marvelous, a belief in the marvelous, intertwined in all my projects, which hurries me out of the common pathways of men, even to the wild sea and unvisited regions I am about to explore". But as this character unfolds his true persona we realise his arrogance does not stretch to the levels of charisma but reveal him to be shallow, self-righteousness and extremely self- absorbed. Any sympathy for him could be granted in the realisation that he is ultimately a terribly lonely man. This though is all dashed away along with his protagonist figure as we learn that this loneliness is completely self-imposed and the result of egotism and snobbishness, "I shall certainly find no friend on the Wide Ocean, nor even here in Archangel, among merchants and seamen". ...read more.

But the monster does not receive the same acquiescence as the first humans as he, in chapter 12, quite biblically tells Frankenstein "remember, that I am thy creature; I ought to be thy Adam; but I am rather the fallen angel, whom thou drivest from joy for no misdeed". The monster obviously feels betrayed by mankind and his creator, the one person he can truly call a father. Obviously Mary Shelley had an excellent childhood surrounded by great minds and literature, which may have inspired the creation of Victor's similar upbringing in the novel. And, inevitably from this fortune she grew up with a hunger for knowledge and admiration of writing. At the age of fourteen Shelley went to stay with friends of her father's in a remote area of Scotland. Here she began writing quite seriously, inspired by the sublime landscape that surrounded her. After this stage in her life she met and fell in love with a young poet named Percy Byshe Shelley, a radical thinker of the time and the equivalent of a rockstar of the Romantic era. In an act of spontaneous passion the two eloped to Europe but upon doing so they were both unfortunately disowned by their disapproving fathers (like the 'orphaning' of the monster by Victor). Out of their native lands, the couple travelled to Switzerland, where Frankenstein is initially set, here they also meet an atheist poet named Lord Byron who invited them to stay with him in his admirable dwellings. In the midst of the Romantic era, Mary started taking large quantities of drugs, predominantly opium, as it was the fashion of the time to do so and began indulging in the excessive lifestyle of the era, the free attitude towards sex and the love of the naturally sublime. At lord Byron's mansion she began writing Frankenstein under the influence on many occasions high levels of opium. ...read more.

Other themes were based around the gothic sublime so celebrated in the Romantic era, "the sublime shapes of the mountains; the changes of the seasons; tempest and calm; the silence of winter, and the life and turbulence of our Alpine summers." What makes Frankenstein such an incredible novel is the feeling of suspense you experience after reading it. This is generated by the consideration of the events that would have occurred if Victor had actually been 'successful' in his endeavors. Would he then have used any further creations to cure the ills of the developing world? Or in fear of eliminating the 'true' human race would Victor have then destroyed any evidence of the monster? This consideration though is why this suspense is so effective in capturing the reader's imagination. He or she can make up their own minds about these alternate events and could effectively be shocked or intrigued about their results. What I mean by this is that if the monster's creation had proved entirely successful and it had happened in reality, what would its effects be? Could it have ruined the 'cycle of life' that previously ended with the 'eternal rest' and would, by eliminating death, their be a heaven or hell? And surely the conservation of life and physical improvement of mankind would eventually lead to an infinitely overpopulated planet and, respectively, the extinction of many species of animal like the lion, bear or elephant, ridiculed by the now 'in-human' strengths of the new superior race. From these aspects we must realise that Frankenstein was extremely shocking for its time due, taken from many reasons, to the fact that it included one of the first anti-heroes (the monster) whom the reader both sympathises and relates to the most; even though he proves to be the microcosm of our inner most fears and insecurities, both hideous and murderous. In conclusion, Frankenstein is a perfect example of the gothic era, the big issues, Life, Death and the obsession with death. ...read more.