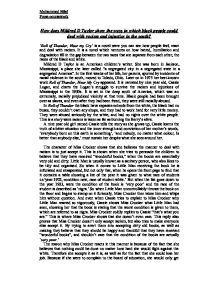 How does Mildred D Taylor show the ways in which black people could deal with racism and injustice in the south?

Mohammed Bilal Prose coursework How does Mildred D Taylor show the ways in which black people could deal with racism and injustice in the south? 'Roll of Thunder, Hear my Cry' is a novel were you can see how people feel, react and deal with racism. It is a novel which ventures on how hatred, humiliation and degradation fill in the gap between the two races that are separate from each other, the races of the black and white. Mildred D Taylor is an American children's writer. She was born in Jackson, Mississippi, a place she later called "a segregated city in a segregated state in a segregated America". In the first weeks of her life, her parents, spurred by incidents of racial violence in the south, moved to Toledo, Ohio. Later on in 1975 her best-known work Roll of Thunder, Hear My Cry appeared. It is narrated by nine year old, Cassie Logan, and charts the Logan's struggle to survive the racism and injustices of Mississippi in the 1930s. It is set in the deep south of America, which was an extremely, racially prejudiced vicinity at that time. Black people had been brought over as slaves, and even after they had been freed, they were still racially abused. In Roll of Thunder the black have separate schools from the white, the black had no buses, they couldn't own any shops, and they had to work hard for very little money. They were abused seriously by the white, and had no rights over the white people. ...read more.

Despite the fact that Stacey doesn't like it; he is always "eager for revenge." Stacey is conspiratorial when it comes to revenge. He thinks of "a plan so drastic it could exclude all lunch." This is when Stacey meets up with his friends; to dig a hole in the road were the bus driver splashes mud at them, and then they fill it with water so that it wouldn't be noticed. This kind of revenge shows that Stacey is mature and knows what he's doing and plans what he does, as well as gets revenge. The reason why Stacey does all his plans in secret is because of the fact that he is aware of what could happen to him if he was found out. He knows that he could get attacked by the white people in several ways, such as being 'tarred and feathered; bullied or beaten; or maybe even get burnt like the Berry's.' Cassie is at first the kind of person who doesn't realise this. Instead she would be violent to the people who are racist to her. Even though she knows racism is wrong, she doesn't yet realise how to deal with things. Ten years old, Cassie is the first-person narrator of the novel. She is the second oldest and only girl in her family. Cassie is intelligent, outspoken, and self-confident, even when those qualities threaten to get her in trouble for speaking her mind in a white-dominated world or simply with her teacher at school. ...read more.

And that was the surprise; Cassie angrily smashes Lillian Jeans's books onto the floor. Lillian Jean was "more startled than angrily," Lillian Jean then orders Cassie to pick up her books, but Cassie boldly replies "make me.", this angers Lillian Jean "Her face paled, then, red with anger, she stopped daintily across the clearing and struck me hard across the face.", and this leads to a fight. Cassie got her down and told her she would spread all her secrets if she were to tell anyone. This clearly shows how Cassie has become more mature and realises the ways to deal with racism. Cassie has realised that she can fight against her rights in secret, and by cleverly planned conduct she gains revenge. On the other hand "T.J's face was totally blank, as if nothing at all happened." This is the kind of person T.J. is, he ignores racism. When the Mr Barnett ignores him and Cassie, it doesn't matter that racism is going on and he was being ignored because he was black, he just ignored it. T.J. is also a person who can be easily manipulated and someone who likes to show-off. This happens when he goes to church and takes R.W. Melvin with him. His "friendship" with the older, white Simms brothers leads him to commit a crime and ultimately come close to being hanged by a mob. He is the catalyst for an eruption of racial tension and at the end will most likely be sent to a chain gang for a murder the Simms committed. ...read more.