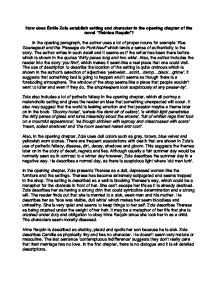 How does mile Zola establish setting and character in the opening chapter of the novel 'Thrse Raquin'? In the opening paragraph, the author uses a lot of proper nouns for example

How does �mile Zola establish setting and character in the opening chapter of the novel 'Th�r�se Raquin'? In the opening paragraph, the author uses a lot of proper nouns for example 'Rue Guenegaud and the 'Passage du Pont-Neuf' which lends a sense of authenticity to the story. The author writes in such detail and it seems as if the writer has been there before which is shown in the quotes 'thirty paces long and two wide'. Also, the author includes the reader into the story 'you find', which makes it seem like a real place that one could visit. The use of description to describe the location of the setting is quite ominous which is shown in the author's selection of adjectives 'yellowish...acrid...damp...black...grime'. ...read more.

'Gloomy holes', 'exhale the dank air of cellars', 'a whitish light penetrates the dirty panes of glass and lurks miserably about the arcade', 'full of whitish rags that took on a mournful appearance', 'as though stricken with leprosy and crisscrossed with scars' 'mean, soiled shadows' and 'the room seemed naked and cold'. Also, in the opening chapter, Zola uses dull colors such as gray, brown, blue velvet and yellowish worn stones. There are frequent associations with death that are shown in Zola's use of pathetic fallacy, disease, dirt, decay, shadows and gloom. This suggests the themes later on in the story of deceit, regrets and lies. Although usually a fair summer day would be normally seen as in contrast to a winter day however, Zola describes the summer day in a negative way. ...read more.

He describes her as 'face was visible, dull white' which makes her seem bloodless and unhealthy. She is very quiet and seems to keep things to her self. Zola describes Therese as being crushed under the weight of her hair. It may be a metaphor of her life that she is crushed under duty and obligation to obey Mme Raquin since she took her in as a child. The characters seem morally diseased. Mme Raquin is described as chubby, placid and spoils her son because he is sick. Zola describes Camille as physically tiny and has no character. He doesn't seem very mature or masculine. The last sentence 'contemptuous indifference' suggests they don't really care that their marriage has no love. In the first chapter, there is no dialogue and it is all detailed descriptions. ?? ?? ?? ?? ...read more.