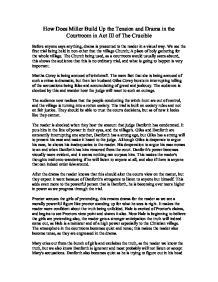 How Does Miller Build Up the Tension and Drama in the Courtroom in Act III of The Crucible.

How Does Miller Build Up the Tension and Drama in the Courtroom in Act III of The Crucible Before anyone says anything, drama is presented to the reader in a visual way. We see the first trial being held in non-other that the village Church; A place of holy gathering for the whole village. The Church being used, as a courtroom would usually seem absurd, this shows the audience that this is no ordinary trial, and what is going to happen is very important. Martha Corey is being accused of witchcraft. The mere fact that she is being accused of such a crime is dramatic, but then her husband Giles Corey bursts in interrupting telling of the accusations being false and accumulating of greed and jealousy. The audience is shocked by this and wander how the judge will react to such an outrage. The audience now realises that the people conducting the witch-hunt are out of control, and the village is turning into a rotten society. The trial is built on society rules and not on fair justice. They should be able to trust the courts decisions, but as of now it looks like they cannot. The reader is shocked when they hear the amount that judge Danforth has condemned. It puts him in the line of power in their eyes, and the village's. Giles and Danforth are constantly interrupting one another, Danforth has a strong ego, but Giles has a strong will to present his case and make it heard to the judge. ...read more.

This creates tension as the audience see Danforth as a powerful figure, they do not know how he will react to such a comment. Danforth seems to be abusing his power. Giles will not give the name of the person who heard Putnam say of his evil plans, as he knows the person shall be hanged. The audience see that the court does not have all the rights they once believed, and that there may be a way around this powerful body that is the court. Giles' blatant threat to Putnam "I'll cut your throat", creates verbal drama, as the reader is shocked at the comment. Danforth constantly tells of order showing that the trial is becoming ever more flimsy, and less organised. This creates drama for the reader, as they can see corruptness and the unwillingness to comply with rules that everyone seems to be showing. Danforth cannot be convinced, he is very clear about his views. He is coming across very powerful even though he is wrong. The reader sees this, and wanders if he will ever know the truth. Mary's break away from the girls makes Danforth confused, he knows not who to believe. Hale shows sympathy to Proctor, as Mary starts crying, it creates tension as the vreader wanders if Danforth's opinion can indeed be changed. Mary's crying shows she is extremely weaker than Danforth, this does not fair well to her accusations. ...read more.

The girls copy Mary's every word; there is a mass of them, but only one of her. The drama for the reader is that Danforth is misguided. He thinks he is doing right, but the reader knows he is not, the reader has seen more than Danforth has. Tension mounts as Mary is told she will be hanged is she does not confess. The reader does not want Mary to die, as they know she is telling the truth, the tension for the reader is, are Mary's moral values stronger than her life? Is she like her Dad? We find out she is not. She confesses to lies. A big turn around occurs when Proctor is accused of witchcraft. We as the reader know that this whole trial would never have started if Abigail had been so selfish to try and kill Proctor's wife. But now it has backfired on her. The irony for the viewer is that Danforth is totally oblivious to this whole ordeal being a fraud. Proctor denounces God at this point, as he says God is dead. This is a highpoint of drama as the reader sees Proctor's amazing moral strength pull through. It furthers even more when he says, "You are pulling heaven down and raising up a whore!" The reader now knows for certain that Proctor will most probably be hanged for saying such a controversial thing in a holy village. Ironically Abigail ends up getting the exact opposite of what she hoped for. Proctor shall be hanged. Top of Form ...read more.