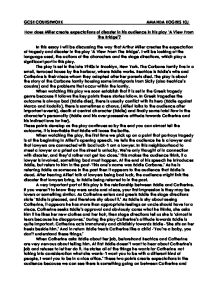 How does Miller create expectations of disaster in his audience in his play &amp;#145;A View From The Bridge&amp;#146;?

GCSE COURSEWORK AMANDA ROGERS 10J How does Miller create expectations of disaster in his audience in his play 'A View From The Bridge'? In this essay I will be discussing the way that Arthur Miller creates the expectation of tragedy and disaster in the play 'A View From The Bridge'. I will be looking at the language used, the actions of the characters and the stage directions, which play a significant part in this play. The play is set in the late 1940s in Brooklyn, New York. The Carbone family live in a small, terraced house by the harbour, where Eddie works. Beatrice is Eddie's wife and Catherine is their niece whom they adopted after her parents died. The play is about the story of the Carbone family housing some immigrants from Sicily (also Beatrice's cousins) and the problems that occur within the family. When watching this play we soon establish that it is set in the Greek tragedy genre because it follows the key points these stories follow. In Greek tragedies the outcome is always bad (Eddie dies), there is usually conflict with its hero (Eddie against Marco and Rodolfo), there is sometimes a chorus, (Alfieri talks to the audience after important events), death of central character (Eddie) and finally some fatal flaw in the character's personality (Eddie and his over possessive attitude towards Catherine and his indirect love for her). These points develop as the play continues so by the end you can almost tell the outcome, it is inevitable that Eddie will loose the battle. When watching the play, the first time we pick up on a point that portrays tragedy is at the beginning in Alfieri's opening speech. He tells the audience he is a lawyer and that lawyers are connected with bad luck-'I am a lawyer. In this neighbourhood to meet a lawyer or a priest on the street is unlucky. ...read more.

'Well you should have thought of it before...but I'm not.' Expectations in the audience are created because Beatrice is suffering in her relationship with Eddie, looking at Catherine and Rodolfo make her happy and Beatrice will favour Catherine in disputes between Eddie and Catherine. Eddie goes to see Alfieri. After he has explained the problem, he asks about law advice-he is taking this situation very seriously. Eddie tells Alfieri that he thinks Rodolfo is gay-'The guy aint right.' '...he makes a new dress. I mean he looked so sweet there-like an angel-you could kiss him he was so sweet.' Alfieri bluntly tells Eddie that the only illegal thing happening here is, 'the way in which they entered the country.' Eddie refuses to touch upon that boundary, 'Oh, Jesus, no, I wouldn't do nothin' about that.' Alfieri then says 'She wants to get married, Eddie. She cant marry you can she?' Stage directions describe Eddie as furious at this remark. Alfieri concludes this scene by telling the audience he can see the outcome unfolding-'I knew where he was heading for, I knew he was going to end.'- a very accurate prediction. By this point expectations of disaster and tragedy in the audience are high. Alfieri has just told the audience he knew Eddie was going to end. That is a vital point in his speech, it tells us he is going to literally end. So far, in the play we have seen how important Catherine and Eddie's relationship is. We have realised that Eddie has feelings for Catherine, more than what he likes to believe himself. We have established that Eddie is very against the idea of Catherine and Rodolfo, because of his jealousy and fear of loosing Catherine. All the characters are at the house for a family meal. After they all discuss some of the places Rodolfo and Marco have been. In conversation Eddie gently warns Rodolfo about Catherine-'It aint so free here either Rodolfo.' ...read more.

This leaves the audience wondering, what could happen to their marriage who is she going to choose? Whoever she does choose will be the others disaster. Catherine finally does stands up to Eddie, harshly, like a woman. She calls him a 'rat' and says 'He bites people in their sleep! He comes when no body's lookin' and poisons decent people. In the garbage he belongs.' A surprise in the audience and some tension because we wonder what will happen to Eddie now? Rodolfo comes and warns Eddie, he warns him that Marco is coming and suggests ways of solving the argument-Eddie ignores him bluntly. Marco calls Eddie out. At this point expectations peak, the audience are on the edge of their seats, desperate to know...what will Marco do? Well after a few insults, their question is answered. As Eddie takes out a knife, our predictions are confirmed. Marco turns the knife. In the street in front of the neighbourhood, 'He dies in her arms' Neither Eddie nor Marco could give into their beliefs and priorities. But Marco, the stronger man, won the battle. At the end of 'A view from the bridge' Alfieri concludes, a very well though out ending, as he is the chorus in the play. This play is a classic tragedy, and in this essay I have written an account of the main events, and the expectations of disaster and tragedy the audience receive. In this play I think the best indication of disaster is when the telephone booth lights up. It answers most of the plays out standing questions up to that point. For example, How will Eddie cope? What will Eddie do? And so on. Overall I think this is a good play, it has been written with excellent use of 'brooklynese' language and Arthur Miller has used stage directions very well. It is a good storyline and gives the mind a lot to think about. A very thought provoking play. AMANDA ROGERS 10J COURSEWORK DRAFT 2 ...read more.