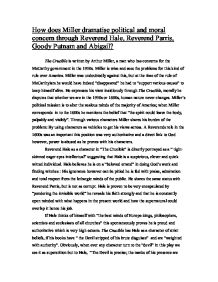 How does Miller dramatise political and moral concern through Reverend Hale, Reverend Parris, Goody Putnam and Abigail? The Crucible is written by Arthur Miller

How does Miller dramatise political and moral concern through Reverend Hale, Reverend Parris, Goody Putnam and Abigail? The Crucible is written by Arthur Miller, a man who has concerns for the McCarthy government in the 1950s. Miller is wise and sees the problems for this kind of rule over America. Miller was undoubtedly against this, but at the time of the rule of McCarthyism he would have indeed "disappeared" he had to "support various causes" to keep himself alive. He expresses his view insidiously through The Crucible, morally he disputes that whether we are in the 1950s or 1600s, human nature never changes. Miller's political mission is to alter the zealous minds of the majority of America; when Miller corresponds in to the 1600s he mentions the belief that "the spirit could leave the body, palpably and visibly". Through various characters Miller shares his burden of the problem: By using characters as vehicles to get his views across. A Reverends role in the 1600s was an important this position was very authoritative and a direct link to God however, power is abused as he proves with his characters. Reverend Hale as a character in "The Crucible" is directly portrayed as a " tight-skinned eager eyes intellectual" suggesting that Hale is a suspicious, clever and quick witted individual. Hale believes he is on a "beloved errand" in doing God's work and finding witches : His ignorance however can be pitied he is fed with praise, admiration and total respect from the lethargic minds of the public. ...read more.

Finally Parris makes a decision and indeed leaves in kin over money and power, he cleverly leaves Abigail in a complicated situation by stating "then you were conjuring spirits last night" he gives away his own kin for power and respect. Millers concern is that many in power are led astray by greed. Miller wants to have these people not in control of the public and it is people like Parris whom are dangerous and selfish Goody Putnam and Parris have similar status she is a women she is married to a powerful landlord. Parris looks up to her and will believe anything, like her. In order to keep status. Goody Putnam is directly portrayed as a "twisted soul" Miller makes us keep a open mind. We already get the gist of this. It means that a person who not trustworthy and has been through so much that they have become bended to one side of an argument. She has been described as "Death ridden" because she had lost all her "seven babies". Later on we will learn how and why she acts in such a irresponsible and insane manner. When she first appears with play she is "shiny eyed" this gives us the opinion that she had just heard extraordinary news that Parris daughter had just flown over a barn. "How high did she fly" as a question shows clear stupidity for then or now anyone could have worked out for themselves they cannot. She indicates to Parris that the "devil" was right under his nose and in his household for there was a "stroke of hell" upon him and the "devil" was directly attacking him. ...read more.

Miller's concern and whole purpose of writing The Crucible is to prove that whether going through "one of the most awful chapters in human history" or in general we never change. The McCarthy Government was ruling due to people like Hale who try to help but only escalate the problem. He warns us of people like this and advises us to keep away for they are potentially dangerous. Craving for power is the form of Reverend Parris, greed and money was all this man cared about as we can see about the analysis we have there are many among us who thirst for power and really will do anything such as Parris who was willing to betray his niece. People with losses should be cared for so that their misery does not turn into hatred of others........ .......... I think that this play has been a very creative piece of work Miller gets is points through to us if we jus have the time to look at the historical and present day morals and politics. His language is complex at first but reveals as you read on. For each problem he has had, he has created a character through we learn a great deal about the people who potentially surround us today. The films differs from the book in many ways but the first thing anyone can point out is the beginning, I think Miller chose the title of The Crucible because he knows that a crucible purifies and removes impurities and that is what he tries to do to the society. Emmanuel Quartey ?? ?? ?? ?? ...read more.