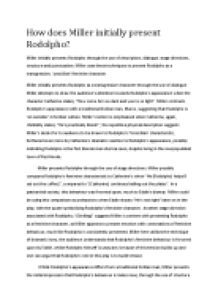 How does Miller initially present Rodolpho?

Transfer-Encoding: chunked ﻿How does Miller initially present Rodolpho? Miller initially presents Rodolpho through the use of description, dialogue, stage directions, structure and punctuation. Miller uses these techniques to present Rodolpho as a transgressive, ?unsicilian? feminine character. Miller initially presents Rodolpho as a transgressive character through the use of dialogue. Miller attempts to draw the audience?s attention towards Rodolpho?s appearance when the character Catherine states; ?How come he?s so dark and you?re so light?. Miller contrasts Rodolpho?s appearance with a traditional Sicilian man, Marco, suggesting that Rodolpho is ?an outsider? in Sicilian culture. Miller?s notion is emphasised when Catherine, again, childishly states; ?He?s practically blond!?, the repetitive physical description suggests Miller?s desire for to audience to be drawn to Rodolpho?s ?Unsicilian? characteristic, furthered ...read more.

Another stage direction associated with Rodolpho; ?(Smiling)? suggests Miller is content with presenting Rodolpho as a feminine character, as Miller appears to present emotion with connotations of feminine behaviour, much like Rodolpho is consistently presented. Miller here utilises the technique of dramatic irony, the audience understands that Rodolpho?s feminine behaviour is frowned upon by Eddie, whilst Rodolpho himself is unaware, because of this tension builds up and one can argue that Rodolpho?s role in this play is to build tension. Whilst Rodolpho?s appearance differs from a traditional Sicilian man, Miller presents the initial impression that Rodolpho?s behaviour is indecorous; through the use of structure and stage directions. ...read more.

On the other hand, Miller maybe equally trying to educate the, mainly American, audience about Sicilian culture. I think that the use of description was especially effective at indicating to the audience that Rodolpho was ?the outsider? and possibly the centre of any drama. I do not think that Miller?s use of punctuation and stage directions are effective for a modern day audience because in an ?Americanised? society, Rodolpho?s behaviour is acceptable whereas when the play was shown to its original audience, Miller?s use of stage directions would have been more effective. Overall, though, I think Miller has presented Miller initially as a transgressive character, and has done so very effectively. ...read more.