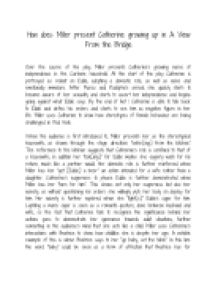 How does Miller present Catherine growing up in &quot;A View From the Bridge&quot;?

Transfer-Encoding: chunked ﻿How does Miller present Catherine growing up in A View From the Bridge Over the course of the play, Miller presents Catherine?s growing sense of independence in the Carbone household. At the start of the play Catherine is portrayed as reliant on Eddie, adopting a domestic role, as well as naive and emotionally immature. After Marco and Rodolpho's arrival, she quickly starts to become aware of her sexuality and starts to assert her independence and begins going against what Eddie says. By the end of Act 1 Catherine is able to talk back to Eddie and defies his orders and starts to see him as negative figure in her life. Miller uses Catherine to show how stereotypes of female behaviour are being challenged in Red Hook. When the audience is first introduced to, Miller presents her as the stereotypical housewife, as shown through the stage directions ?enter[ing] from the kitchen?. The reference to the kitchen suggests that Catherine's role is confined to that of a housewife; in addition her ?look[ing]? for Eddie implies she eagerly waits for his return, much like a partner would. ...read more.

This goes directly against what Eddie was just telling Rodolpho and is the first instance in which Catherine challenges Eddie's authority. This goes along with the first quote go to show just how much she has changed from when we first met her; she has gone from completely dependent on Eddie and has begun to start to challenge him. Catherine's interactions with Beatrice begin to show how she has started to drift away from what's expected of her as a stereotypical woman. Miller develops this idea through the fact that throughout the scene Catherine has been ignoring the duty given to her by Eddie, to get the guests coffee, and has forced Beatrice to take the job and ?get the coffee? herself. This moment signifies the point where Catherine starts to no longer act as a wife towards Eddie, and allows Beatrice to take that role once again. Miller uses Catherine's and Rodolpho's relationship to show how she is maturing sexually. From the start Miller makes it very clear from the start that Catherine is interested in Rodolpho when he describes her as ?wondrously? asking him about his complexion. ...read more.

Beatrice is one of those who recognises that Catherine is maturing, and helps her in doing so. She tells Catherine throughout their conversation that she's ?not a baby anymore?. ?Baby? was the term of affection originally used by Beatrice to refer to Catherine, so her telling Catherine that she is no longer a ?baby?, implies that Beatrice no longer sees her as a child and that she is trying to convince Catherine that she is growing up to be a woman. Finally, Miller uses her relationship with Rodolpho to show how she has now gained independence and is able to defy Eddie. The most notable example of this is when she asks Rodolpho if he ?wanna dance?. This comes right after when Eddie starts questioning Rodolpho on the way he behaves while he is out. Catherine asking Rodolpho to dance serves to act as a gesture of rebellion whose purpose is to show to Eddie that Catherine is now able to think for herself and goes to demonstrate that she no longer needs his approval on what she can and cannot do. Miller uses Catherine to explore the developing theme of womanhood and the struggle for female independence and by doing so he also uses her to challenge the traditional stereotypes that females in Red Hook, and by extensions the world, face. ...read more.