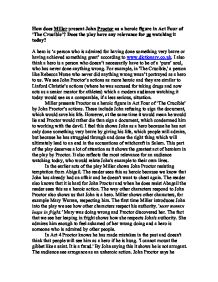 How does Miller present John Proctor as a heroic figure in Act Four of 'The Crucible'? Does the play have any relevance for us watching it today? A hero is 'a person who is admired for having done something very brave or having achieved something great' according to www.dictionary.co.uk. I also think a hero is a person who doesn't necessarily have to be of a 'pure' soul, who has never done anything wrong. For example, in 'The Crucible,' a person like Rebecca Nurse who never did anything wrong wasn't portrayed as a hero to us. We see John Proctor's actions as more heroic and they are similar to Linford Christie's actions (where he was accused for taking drugs and now acts as a senior mentor for athletes) which a modern audience watching it today would see as a comparable, if a less serious, situation. Miller presents Proctor as a heroic figure in Act Four of 'The Crucible' by John Proctor's actions. These include John refusing to sign the document, which would save his life. However, at the same time it would mean he would lie and Proctor would rather die than sign a document, which condemned him to working with the devil. I feel this shows John as a hero because he has not only done something very brave by giving his life, which people will admire, but because he has struggled through and done the right thing which will ultimately lead to an end in the accusations of witchcraft in Salem. ...read more.

In this final act Miller suggests to us that John is performing actions with other people in mind rather than himself. If he confesses he wants to know if other people will be able to forgive him for lying. 'What would you have me do?' Proctor is thinking about confessing and he does not want Elizabeth, or any other person, to think badly about him for lying. This is because he is feeling guilty. This guilt shows human emotions and the audience sees this as something they can relate to in their everyday life, because John is a person like us. However, John leads by example and, although he is human, he is a role model who always tries to do the right thing even if it is difficult and may have consequences for him. An earlier example of this is John attempting to save Elizabeth in court by confessing his act of adultery. 'I have known her, sir.' This is what makes him heroic for the audience as he tries to do the right thing, for other people not just him, when it is sometimes difficult because of the resulting consequences. Another way in which we see John as heroic is because he physically tears up the confession slip. 'PROCTOR tears the paper and crumples it.' This action by Proctor is heroic because he is trying to correct his mistakes. Proctor isn't perfect but he tries to make up for what he has done wrong in the past. ...read more.

'There is no word of the boys?' When John says this the audience see a side of him remaining calm when he afraid. He knows he could be hung but manages to keep an awkward conversation flowing by referring to a subject easy to talk about. This is a skill which we recognise and commend Miller for demonstrating in Proctor. Also the way John Proctor's character is played on stage demonstrates his courage. John enters the stage 'looking ragged and sick.' His physical appearence and the way he enters the stage by staggering on makes the audience empathise with him. Miller chose Proctor as the main character of 'The Crucible' because he could be portrayed as a hero. Rebecca Nurse was a better character than John Proctor in principle. Nevertheless Miller chose John Proctor as the main focus of the play. If Miller had chosen Rebecca Nurse as the main character then the audience would have seen her as unrealistic because she is perfect. By choosing Proctor we can relate to him and see John as a role model to base our life around as he is heroic. In conclusion, I feel Miller chose true events from U.S. History rather than inventing allegory, like George Orwell's Animal Farm, because then we can relate to and believe the story. If he had used an allegory we would have thought the play wasn't relevant to our life today. Miller used the Salem Witchtrials because he wanted to make the point that the message of the story could be transferred to our everyday lives. ...read more.