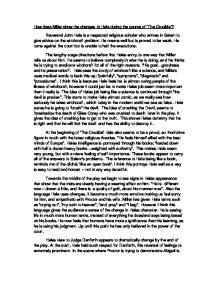 How does Miller show the changes in Hale during the course of The Crucible?

How does Miller show the changes in Hale during the course of 'The Crucible'? Reverend John Hale is a respected religious scholar who arrives in Salem to give advice on the witchcraft problem. He means well but is proved to be weak. He turns against the court but is unable to halt the executions. The lengthy stage directions before first Hales entry, is one way that Miller tells us about him. He seems to believe completely in what he is doing, and he thinks he is trying to eradicate witchcraft for all of the right reasons. "His goal...goodness and its preservation". Hale sees the study of witchcraft like a science, and Millers uses medical words to back this up; "painfully", "symptoms", "diagnostic" and "procedures". I think this is because Hale feels he is almost curing people of the illness of witchcraft, however it could just be to make Hales job seem more important than it really is. The idea of Hales job being like a science is continued through "the devil is precise". This starts to make Hale almost comic, as we really see how seriously he takes witchcraft, which today in the modern world we see as false. ...read more.

Towards the middle of the play we begin to see signs in Hales appearance that show that the trials are clearly having a wearing effect on him. "He is different now - drawn a little, and there is a quality of guilt, about his manner now". Also the language Hale uses changes. It becomes much more emotive making us feel sorry for him, and empathetic with Proctor and his wife. Miller has given Hale terms such as "crying out", "my oath to heaven", "and pray" and "I beg". However I think this language gives the audience a sense of the change in Hales character. He is seeing life in much more human terms, instead of everything he does/and says being based on his books. He now feels that humans have more significance than his learning, as he is using his judgment. Up until this point he has only believed in the power of the court. Hales view to Judge Danforth appears to dramatically change by the end of the play. At the start, Hale held such respect for Danforth, this reversal of feelings is extremely prominent. ...read more.

This event coincides with the ending of the scene to heighten the drama and increase the tension. This ending is important as it shows the change of power dynamics. Danforth is left completely powerless. Following this, Miller uses contrast to show the difference between Hale at the start and Hale at the end. The man who originally wanted to defeat the devil is now acting as its servant "I come to do the Devil's work". Although he is being sarcastic, we realize that he is becoming aware of his guilt - he even feels his guilt should be physically visible "can you not see the blood on my head". This produces imagery similar to the hanging, and therefore parallels the hanging of many innocent victims. I think that Miller is trying to explore the ideas of justice in recognizing the injustice of the court. Hale is a key character, and his first emotional followed by mental change is how his character is developed. Miller used language, stage directions and the setting to help emphasise this. I think that by the end of the play, Hales character is a lot deeper with greater feelings and opinions. His books are no longer the most important thing. ...read more.

This is a well expressed response that explores some key ideas that come up in the play. There is reference to language, structure and form and the explanations of textual references are sound. Links to the contextual factors that influenced the writing of the play could have been included to further strengthen the response.