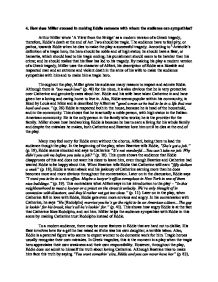 How does Miller succeed in making Eddie someone with whom the audience can sympathise?

4. How does Miller succeed in making Eddie someone with whom the audience can sympathise? Arthur Miller wrote 'A View from the Bridge' as a modern version of a Greek tragedy, therefore, Eddie's death at the end of Act Two should be tragic. The audience have to feel pity, or pathos, towards Eddie when he dies to make the play a successful tragedy. According to 1.Aristotle's definition of a tragic hero, the hero should be noble and of high status; he should have a flaw, or hamartia, which should lead to his tragic ending; his punishment should seem to be harsher than his crime; and he should realise that his flaw has led to his tragedy. By making his play a modern version of a Greek tragedy, Miller uses the character of Alfieri, his description of Eddie as a likeable and respected man and an extreme and violent death in the arms of his wife to make the audience sympathise with him and to make him a tragic hero. Throughout the play, Miller gives his audience many reasons to respect and admire Eddie. Although there is "too much love" (p. 48) for his niece, it is also obvious that he is very protective over Catherine and genuinely cares about her. ...read more.

We're only thought of in connexion with disasters, and they'd rather not get too close." (p. 11). Later on in the play, when Catherine fell in love with Eddie, Eddie gets even more envious and angry. In his conversation with Catherine, he says "He [Rodolpho] marries you he's go the right to be an American citizen...The guy is lookin' for his break, that's all he's lookin' for." (p. 41). This shows how angry Eddie is at the fact that Catherine likes Rodolpho, and not him. Miller helps the audience sympathise with Eddie in this scene by making Catherine trust Rodolpho instead of Eddie. To a modern audience, there may be some features in Eddie that are hard not to dislike. His flaw involves love for a girl he has raised as if she was his own daughter, a terrible taboo. Also, Eddie is a parental figure who seems to expect women to do domestic work for him. Tragic heroes usually recognise their own mistakes. In Greek tragedies, this is the moment in a play when the tragic hero appreciates their own weakness and their own responsibility. However, throughout the play, Eddie does not admit to himself the truth about loving Catherine. Although Beatrice tries to make him face this truth by saying "You want somethin' else, Eddie and you can never have her" (p. ...read more.

Right from the beginning, Miller makes it obvious that Eddie would die in the end. Alfieri keeps giving clues to the audience about Eddie being destined to die, saying he felt "powerless... and watched it run its bloody course." (p. 12) Another quote from Alfieri is, "I knew where he [Eddie] was heading for, I knew where he was going to end." (p. 50) These quotes make us feel more pity for Eddie because, even when he seems happy and loving, we still know he is heading towards a "bloody" (p. 12) end. Miller successfully makes Eddie a sympathetic character by making him fit the tragic hero he is supposed to be. The audience goes from admiring Eddie to getting to know his terrible guilty secret. Through the whole play we get the unescapable feeling that he is heading towards his "bloody" end and that it is his 'guilty secret' that will cause it. Although for some modern theatre audiences, Eddie may seem to be an old-fashioned man and although he never really admits his own faults, Miller uses Alfieri's character to make sure we can still feel the intended pity. I think this is Miller's greatest achievement in this play, reminding us that we are all human, guilty in some ways, and that we should feel sorry for ourselves and Eddie for that. Word Count: 1,000 Resources used: 1. http://vccslitonline.cc.va.us/tragedy/aristotle.htm ?? ?? ?? ?? ...read more.

Response to Question
In this question, it is very important candidates read the question carefully, and focus on the ways in which Miller makes Eddie a sympathetic character, and not if this is the case or not. This candidate succeeds ...

Response to Question
In this question, it is very important candidates read the question carefully, and focus on the ways in which Miller makes Eddie a sympathetic character, and not if this is the case or not. This candidate succeeds in this, examining the techniques used by Miller to characterise Eddie in a very extensive and developed way. The inclusion of Aristotle's definition of tragedy also shows depth and further research, signalling to examiners that this is a very strong candidate.

Level of Analysis
The candidate's analysis of the text is excellent. The candidate uses a lot of quotations to support their arguments with between 2-6 quotes per paragraph, showing a solid knowledge of the text. The use of the Point, Evidence, Analysis formula also demonstrates a higher level candidate, and an example of the analytical part of the PEA formula is "This quote shows the audience that Eddie disapproves of this..." In this, the candidate is explaining the effect that the line has on the audience, marking them out as an A or A* student.

Quality of Writing
The candidate's essay is of a high standard, with excellent quality of written communication. Quotations are integrated into sentences well, making for a much better flowing essay, for example "Beatrice tries to make him face this truth by saying Ã¢â‚¬Å“You want somethinÃ¢â‚¬â„¢ else..."". However, providing page references is not necessary, as examiners are unlikely to check the quotations used (but do not use this as an excuse to misquote!) and depending on the edition of the text, the page numbers for the quotes used may be different. The referencing of Aristotle's definition of tragedy is a good technique, showing a strong candidate and learning to reference properly will stand students in good stead for further and higher education.