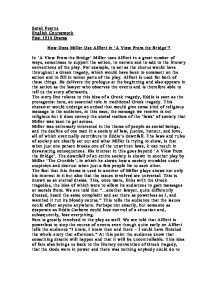 How Does Miller Use Alfieri in 'A View From the Bridge'?

Sarah Fearns English Coursework Post 1914 Drama How Does Miller Use Alfieri in 'A View From the Bridge'? In 'A View From the Bridge' Miller uses Alfieri in a great number of ways, sometimes to support the action, to narrate and to add to the literary conventions of the play. For example, to act as the chorus would have throughout a Greek tragedy, which would have been to comment on the action and to fill in minor parts of the play. Alfieri is used for both of these things. He delivers the prologue at the beginning and also appears in the action as the lawyer who observes the events and is therefore able to tell us the story afterwards. The story line relates to this idea of a Greek tragedy, Eddie is seen as the protagonist hero, an essential role in traditional Greek tragedy. This character would undergo an ordeal that would give some kind of religious message to the audience, in this case, the message we receive is not religious but it does convey the social realism of the 'laws' of society that Miller was keen to get across. ...read more.

To Eddie, he tries to talk about letting Catherine go and giving her his blessing as he knows that if he doesn't, Eddie will lose everything. Likewise, he says to Marco that he must promise not to kill Eddie. Alfieri knows that there is much at stake for Marco and tries to reason with him. This highlights particularly the similarities between Eddie and Marco, both of whom ignore Alfieri's reasoning and question him on the subject of law and justice. Possibly the most significant part of the play, especially in reference to Alfieri, is the prologue. At this point, the audience are told what happens in the play before it even begins. This was used in Greek tragedy and upholds the literary conventions used by Miller. In this case, we are told that "...to meet a lawyer or a priest on the street is unlucky. We're only thought of in connection with disasters." It is the reference to 'disasters' which immediately tells the audience that something disastrous will happen and this causes tension throughout the play as we are always waiting for the disaster to happen. ...read more.

If we were to be given Catherine's story or Marco's or any other character's, the play would take on a different meaning and we would lose our knowledge of law and justice. It is imperative that we understand the two or we will not understand why the events happen in such a way. Although some stage directions have him walking away into darkness, we never hear of him leaving and so he is always close by. This combined with his act of narrator and chorus contribute towards him being almost our companion whilst we move through the play, especially as he addresses us, as the audience, directly. In conclusion, Miller uses Alfieri in a number of different ways. As chorus, narrator, character in action, dramatic device, and to uphold many of the plays themes. Alfieri is a key character and without his input, it is impossible to identify with the themes and to appreciate the relevance of the play and the fate of its protagonist. It is through this, that we understand and judge the play correctly, empathise with the characters and gain the intended emotions from witnessing the struggle and pain caused when someone breaks the unwritten laws of society. ...read more.