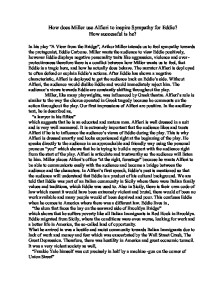 How does Miller use Alfieri to inspire Sympathy forEddie?

How does Miller use Alfieri to inspire Sympathy for Eddie? How successful is he? In his play "A View from the Bridge", Arthur Miller intends us to feel sympathy towards the protagonist, Eddie Carbone. Miller wants the audience to view Eddie positively, however Eddie displays negative personality traits like aggression, violence and over-protectiveness therefore there is a conflict between how Miller wants us to feel, that Eddie is a tragic hero, and how he actually does behave. The narrator Alfieri is deployed to often defend or explain Eddie's actions. After Eddie has shown a negative characteristic, Alfieri is deployed to get the audience back on Eddie's side. Without Alfieri, the audience would dislike Eddie and would immediately reject him. The audience's views towards Eddie are constantly shifting throughout the play. Miller, like many playwrights, was influenced by Greek theatre. Alfieri's role is similar to the way the chorus operated in Greek tragedy because he comments on the action throughout the play. Our first impressions of Alfieri are positive. In the ancillary text, he is described as, "a lawyer in his fifties" which suggests that he is an educated and mature man. Alfieri is well dressed in a suit and is very well mannered. It is extremely important that the audience likes and trusts Alfieri if he is to influence the audience's views of Eddie during the play. This is why Alfieri is dressed smartly and looks experienced right at the beginning of the play. ...read more.

This will make the audience wonder whether Eddie's course in life has changed from Marco and Rodolpho arriving and whether he has truly got a destiny. In this speech, Alfieri emphasises "trouble" which creates suspense, as the audience now knows that something is going to happen during the course of the play. Miller uses this technique at the end of Alfieri's speeches to create tension and to change the view of the audience, as they know something sinister will happen to Eddie. This will make the audience feel sympathetic towards Eddie once again. By "fading" the lights on Alfieri, Miller creates an eerie and menacing mood. Having established Alfieri's trustworthiness in his choric role, Miller allows the audience to view Alfieri in character, the community lawyer from whom Eddie seeks advice. Although Alfieri does not explicitly state that he sympathises with him, this is a vital scene in terms of influencing the audience's perception of Eddie. Alfieri asks lots of questions and for the first time the audience sees Eddie struggling to explain his emotions, "Lemme just bring out what i mean". Eddie's argument is flimsy because there is nothing wrong about someone being homosexual or in Eddie's words "ain't right" and his thoughts are irrational. He goes to Alfieri seeking advice and wants him to sympathise because he cares about Catherine, "I struggled for that girl". This is a positive quality Eddie has shown but there are consequences of this trait. ...read more.

Alfieri's final words fit the final action of the play because he is talking about Eddie's decisions and it fits because Eddie's choices have led him to death. Alfieri concludes that it is better to "settle for half" but he admires and loves Eddie for refusing to compromise. Alfieri does not deliver his conclusion confidently which is shown in Miller's use of punctuation "-" and "...." which shows his hesitancy and the lack of confidence in his belief. Alfieri's tone sounds almost confessional in his final speech as he pours out his feelings after Eddie's death. The audience will be left thinking about what will happen after the play and it will leave them remembering it because of Alfieri's final words. There is an element of contradiction to Alfieri's final words because he believes that it is wise to compromise and yet he loves Eddie who refused to. This shows that it is not possible to have a fixed view on Eddie throughout the whole play. Miller uses Alfieri to constantly shift the audience's view of Eddie by deploying Alfieri every time Eddie shows a negative trait. I think Alfieri finally does inspire sympathy for Eddie although some people may not sympathise with him but completely dislike him because of his negative behaviour. This is Miller's intention throughout the play because of his use of Alfieri. I do not sympathise with Eddie but i pity him because he knew no better and he was a product of his cultural background. Eddie was not fully equipped for the predicament he faced and his limited intellect led to a tragic event at the end of the play. ...read more.