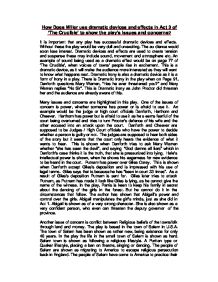 How Does Miller use dramatic devices and effects in Act 3 of 'The Crucible' to show the play's issues and concerns?

How Does Miller use dramatic devices and effects in Act 3 of 'The Crucible' to show the play's issues and concerns? It is important that any play has successful dramatic devices and effects. Without these the play would be very dull and unexciting. The audience would soon lose interest. Dramatic devices and effects are used to create tension and suspense these may include sound, movement and atmosphere etc. An example of sound being used as a dramatic effect would be on page 77 of 'The Crucible', when voices of towns' people rise in excitement. This is a dramatic device, as it will make the audience more interested as they will want to know what happens next. Dramatic Irony is also a dramatic device as it is a form of Irony in a play. There is Dramatic Irony in the play when on Page 91, Danforth questions Mary Warren, "Has he ever threatened you?" and Mary Warren replies "No Sir". This is Dramatic Irony as John Proctor did threaten her and the audience are already aware of this. Many issues and concerns are highlighted in this play. One of the issues of concern is power, whether someone has power or is afraid to use it. An example would be the judge or high court officials Danforth, Harthorn and Cheever. Harthorn has power but is afraid to use it as he seems fearful of the court being overturned and tries to turn Proctor's defence of his wife and the other accused into an attack upon the court. ...read more.

These events in the play relates back to McCarthyism, when a person is a Communist or even a friend of Communist could face jail or even execution. These events are in the same way as the "The Crucible". "The Crucible" is one of the most famous plays of Arthur Miller. The play deals with a story, which is a typical writing style of Arthur Miller as a dramatist. Miller's plays always highlight difficult and controversial issues of the society. The dramatist always creates such a situation in his plays, where his audiences change their views on society. The audiences are made aware of unpleasant human behaviour. In the play, Miller has once again involved his audiences into such a story, which is exciting, gripping, suspenseful and full of social issues. "The Crucible" won an award in 1953. It was written at a time when social issues it deals with were prevailing at that time. McCarthy anti-communist Campaign and investigations were going on and the audience were quick to recognize the resemblance. For example, people like famous Communist people or innocent people with little or no evidence were simply ruined. These people suffered and all hope of their career was lost. Senator McCarthy created the atmosphere of suspicion in United States resembled the plot in the play. Especially McCarthy charges against President Truman and Eisenhower. However, like "The Crucible" the witch-hunt continued for some years and Arthur himself was called in front of the House Un-American Activities Committee in 1956. ...read more.

The dramatist shows the character of Elizabeth, which is full of kindness forgiveness and loyalty, who denies any knowledge of affair between John and Abigail. Proctor's attempt to persuade the court that the girls are merely pretending, does not works, when Mary cries out "You're the Devil's man!" She further claims that Proctor tried to make her sign the Devil's book. Proctor is arrested and accused of being 'combined with 'anti-Christ'. Hale denounces the court and leaves with Danforth angrily calling after him. Proctor is put under pressure to confess by the judges when Proctor says, "I speak my own sins; I cannot judge another", and "They think they can go like saints. I like not to spoil their names". It means that Proctor knew most of the crimes or sins committed of the characters in the play. But he himself became a martyr and paid up with his life for other people sins. Act 3 is quite successful in showing the play's issues and concerns through its use of dramatic devices and effects. Many of the events in "The Crucible" occur because of the oppressive nature of the society in which people lived in the 17th Century. Act 3 takes place in the courtroom and presents us with the life or death struggle between superstition and reason. Hopes are raised and dashed. A crucial point in the drama is reached when John confesses to his adultery to Elizabeth. But it is Mary who denounces John Proctor who is arrested. ...read more.