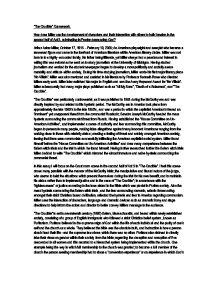 How does Miller use the development of characters and their interaction with others to build tension in the second half of Act 3, culminating in Proctor denouncing God?

"The Crucible" Coursework. How does Miller use the development of characters and their interaction with others to build tension in the second half of Act 3, culminating in Proctor denouncing God? Arthur Asher Miller, October 17, 1915 - February 10, 2005; An American playwright and essayist who became a renowned figure and came to the forefront of American literature within American literary circles. Miller was not born in to a highly-educated family, his father being illiterate, yet Miller always had a passion and interest in writing this was evident as he went on to study journalism at the University of Michigan. Having studied journalism and worked for the student newspaper began to develop a more politically and socially aware mentality and attitude within society. During his time studying journalism, Miller wrote his first major literary piece "No Villain". Miller was also mentored and assisted in his literature by Professor Kenneth Rowe who directed Millers early work. Miller later switched his major to English and won the Avery Hopwood Award for "No Villain". Miller subsequently had many major plays published such as "All My Sons", "Death of a Salesman", and "The Crucible". "The Crucible" was particularly controversial, as it was published in 1953 during the McCarthy era and was directly inspired by and related to this hysteric period. The McCarthy era in America took place from approximately the late 1940's to the late 1950's, and was a period in which the capitalist American's feared an "imminent" yet unapparent threat from the communist Russian's; Senator Joseph McCarthy headed the mass hysteria surrounding the communist threat from Russia. Having established the "House Committee on Un-American Activities", and implemented a sense of authority and fear surrounding this committee, McCarthy began to persecute many people, making false allegations against many innocent Americans ranging from the working class to those with celebrity status; creating a feeling of threat and anxiety amongst American society, fearing that there were communists successfully infiltrating the American capitalist social system. ...read more.

As the scene progresses Danforth grows frustrated, as the case begins to be continually complicated. This is shown as Danforth aggressively asks leading questions, in a desperate attempt to manipulate proceedings in his favour; this is shown as Danforth says, "(Pounding it into her): You have seen the Devil, you have made compact with Lucifer, have you not?" The use of the leading question highlights Danforth's desperation; the leading question places the answer in the mouth of the person answering, placing the person answering under immense pressure, to answer in the manner the person who is asking the question desires. The stage directions, "(Pounding it into her) are key in this quote, showing Danforth frustration. The word pounding has connotations of relentlessness, aggression and intensity. The stage directions show Danforth's frustration, and as a reader, you can imagine how this line could be performed, with Danforth, standing up, shouting at Mary, and pounding the table he stands behind, with clenched fists. Danforth's relentless manipulation of the case reflects the McCarthy trials. The mass hysteria surrounding the trials, placed the judge, who could see through the mass hysteria, under immense pressure to maintain the hysteria, as this would give them the ability to remove those in opposition to their cause; the hysteria causing the public to be easily led astray, being carried blindly by the hysteria, thus giving power to the person in the position of power, to manipulate the public into believing, and gather against the common enemy; The common enemy during the McCarthy era being communists, and anyone who was seen to be in support of the communists, and their values, accused of being a communist or communist sympathiser. In the case of "The Crucible" the enemy being those accused of witchery and anyone who was in support of the accused 'witch' was accused of witchery. This builds tension as the audience can see through the mass hysteria; the audience can see Danforth's self-driven motivation, trying his utmost to maintain his position and respectable reputation. ...read more.

This self maintenance is again linked heavily to McCarthyism, McCarthy, just as Danforth, needed to eradicate his opposition and fuel the mass hysteria, if he had any chance of keeping his high position in society; as a result of this he wrongly accused many innocent Americans, especially those with celebrity status, knowing that the media would use this and stir up the mass hysteria amongst the public. To conclude, Miller uses the development of Danforth's character, to build tension, culminating in Proctor finally denouncing God, effectively. The fact that Danforth is nervous at the start of the scene, immediately builds tension; as the audience can see that there are flaws in his argument, and that he is already trying to cover these up, by using his position of power to direct the early course of the case in his favour. As the battle between Danforth and Proctor develops over the course of the scene, Danforth cleverly introduces, and sides with Abigail, allowing her to lead proceedings whilst Danforth would intelligently follow, improvising and feeding of Abigail's wild allegations and went along with her whilst she fell under the "possession" of Mary. All the while, discrediting Hale, who was a key to Proctor's argument. Danforth also introduced the wife of Proctor, after leading him to confess lechery with Abigail, only for his wife to deny his confession. This then makes Proctor appear to be dishonest, as the scene develops further, Proctor becomes further infuriated, seeing his arguments were being discredited. After Danforth has got to the point where his desperation leads to him accusing Proctor, of being "combined with anti-Christ", this fills Proctor with rage, seeing him denouncing God. Miller wants us, as an audience to side with and empathies with Proctor; Proctor representing the voice of reason and Miller himself in many ways. With Danforth representing McCarthy himself, Miller uses Proctor, to make the audience see how ridiculous and unjust Danforth and McCarthy were. ?? ?? ?? ?? ...read more.