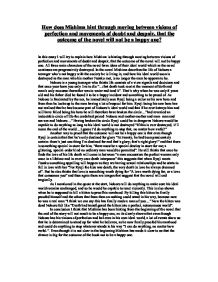 How does Mishima hint through moving between visions of perfection and movements of doubt and despair, that the outcome of the novel will not be a happy one?

Having broken the circle Ryuji could be in danger as Noboru would be capable to do anything as long as his ideal world is not destroyed "If this is ever destroyed, it'll mean the end of the world...I guess I'd do anything to stop that, no matter how awful!" Another way to proof that the outcome will not be a happy one is that even though Ryuji is certain that that he's only destined for glory "At twenty, he had been passionately certain: there's just one thing I'm destined for and that's glory; that's right glory!" and that there is something special in store for him, "there must be a special destiny in store for me; a glittering, special-order kind no ordinary man would be permitted". He still thinks that once he finds the love of his life death will come in between "a man encounters the perfect woman only once in a ...read more.

Now the kitten was dead Noboru felt like "Death had transfigured the kitten into a perfect, autonomous world". In conclusion I think that Mishima has been hinting from the beginning of the novel that the end of the story will not result to be a happy one, as its clearly shown that even though Noboru has his visions of perfection and believes in his own ideal world, a lot of events show us that he is determined to stand up for what he believes, as he now finally proofed his manhood and could do anything to stop whatever stands in his way "I can do anything, no matter how awful.". Even though it is not clear in the beginning Mishima has made it clear to us that the chance is big for the outcome of the book not to be a happy one. ...read more.