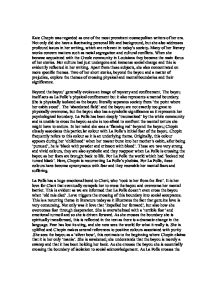 Kate Chopin was regarded as one of the most prominent cosmopolitan writers of her era. Not only did she have a fascinating personal life and background, but she also addresses profound issues in her writing, which are relevant in today's society. Many of her literary works concern matters such as racial segregation and cultural conflicts. When she became acquainted with the Creole community in Louisiana they became the main focus of her stories. Her culture had just undergone and immense social change and this is evidently reflected in her writing. Apart from these subjects, she also concentrated on more specific themes. Two of her short stories, beyond the bayou and a matter of prejudice, explore the themes of crossing physical and mental boundaries and their significance. Beyond the bayou' generally evokes an image of mystery and confinement. The bayou itself acts as La Folle's physical confinement but it also represents a mental boundary. She is physically isolated as the bayou literally separates society from 'the point where her cabin stood'. The 'abandoned field' and the bayou are not exactly too great to physically overcome, but the bayou also has a symbolic significance as it represents her psychological boundary. La Folle has been deeply 'traumatized' by the white community and is unable to cross the bayou as she is too afraid to confront the mental torture she might have to endure. ...read more.

Chopin uses short and punchy sentences to sustain the intense atmosphere. Chopin describes how La Folle's heart was beating like a 'muffled hammer'. Here she uses vivid descriptions and a sense of urgency to display La Folle's love and dedication to Cheri. Chopin also displays how 'terrified' La Folle is when she crosses the bayou, and this shows us the extent of La Folle's love and dedication. After love empowers La Folle to cross the bayou she undergoes a spiritual transformation and her senses are aroused. Her cool and calm nature is mirrored in the language as Chopin frequently refers to positive and aesthetically pleasing colour such as the 'white', the 'blue' and the 'silver'. These colours are a contrast to the beginning where the only colours mentioned were the 'red' and 'black'. The surroundings are appealing to La Folle's senses. She can feel the 'delicious grasses' beneath her feet. She can hear the 'singing' birds; she can smell the assortment of 'perfumes' and she displays confidence and defiance when she sits on the 'front steps'. All of this is a result of La Folle crossing her mental boundary and the writer is trying to emphasise how La Folle is physically and mentally free and how her fears have vanished. This means that she now has the capacity to admire the beautiful surroundings and enjoy life as her fears are not restricting her anymore. ...read more.

Like in Beyond the Bayou, both protagonists are empowered by love which enables them to overcome their fear or prejudice and it triggers them to cross the boundary. Madame realises that the child is sick as she observed that the girl's cheeks 'were very hot and flushed'. As Madame cares for the American child, she is able to overcome her prejudice as she feels sympathy for the child. The little girl's 'tone of voice, her 'little body' and her other physical aspects 'had sunk through the crust of Madame's prejudice'. She realised that an American child could be just as adorable as a French one, and this made her see the flaw in her ideologies. As she enters the American part of town she crosses a physical boundary, a cultural boundary and a familial boundary. She crosses the familial boundary by reuniting with her son, and she crosses the cultural boundary by acknowledging the co existing cultures and accepting them. There is an immense contrast between the American quarter of town and the French quarter. In both stories there is a significant change in language, tone and imagery after the crossing of the boundary. In Beyond the Bayou, the beauty of the surroundings is used to indicate La Folle's spiritual awakening. Here however, Chopin projects the image of reconciliation and the transformation of Madame, from a stubborn and ignorant lady, to a reformed and socially accepting person. This idea is enacted in the imagery used. Chopin vividly describes how the American houses were 'the most beautiful' and how they had taken on 'splendid growth'. ...read more.