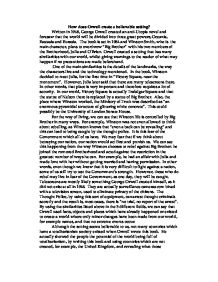 How does Orwell (1984) create a believable setting?

How does Orwell create a believable setting? Written in 1948, George Orwell created an anti-Utopia novel and foresaw that the world will be divided into three great powers; Oceania, Eastasia and Eurasia. The book is set in 1984 and Winston Smith, who is the main character, plans to overthrow "Big Brother" with his two members of the Brotherhood, Julia and O'Brien. Orwell created a setting that has many similarities with our world, whilst giving warnings to the reader of what may happen if no precautions are made beforehand. One of the main similarities is the details of the landmarks, the way the characters live and the technology mentioned. In the book, Winston decided to meet Julia, for the first time in "Victory Square, near the monument". ...read more.

It is this fear of the Government which all of us have. We may fear that if we think about betraying our nation, our nation would act first and punish us. We can see this happening from the way Winston chooses to rebel against Big Brother: he joined the rumored Brotherhood and acted against the restriction in the greatest number of ways he can. For example, he had an affair with Julia and made love with her without getting married and having permission. In other words, even though we know that it is very difficult to fight against a nation, some of us still try to test the Government's strength. However, those who do rebel may live in fear of the Government, as one day, they will be caught. ...read more.

As mentioned in the book, the United Kingdom was called "Airstrip one". This means that in the future, capitalist countries may control its people with more restrictions and rules and therefore, make its people become more scared and obedient. To conclude, Orwell created a believable setting by using similarities in the way people feel, for example, being scared of totalitarianism, making alterations to the landmarks of the United Kingdom, for example Trafalgar Square and by using ideas which he created himself. The best example of this would probably be the telescreen. In other words, he changed events, facts and places in a way that readers will be able to recognize straight away, as well as using elements of his own mind. ...read more.

This essay responds well to the task. There is a clear understanding of the methods Orwell uses to create a believable setting, and what I particularly like is the exploration of why he does it. In the introduction the essay ...

This essay responds well to the task. There is a clear understanding of the methods Orwell uses to create a believable setting, and what I particularly like is the exploration of why he does it. In the introduction the essay clearly states that the novel acts as a precaution, showing an awareness of the reason he uses the techniques. I would've liked to have seen this discussed more, as there isn't much allocated to this side of the argument in the conclusion. I understand this essay task is quite limiting, but I would've taken it further to discuss how the novel would not be effective if the setting was not believable. I just worry with these sorts of essays that they are too short and don't explore the question's avenues enough, giving a reason for the examiner to penalise decent analysis.

The analysis here is good, but I would've liked to have seen in each paragraph more focus on the question. For example, there is a clear understanding of familiar names of buildings and landmarks. But, I would've liked to have seen a discussion of why this becomes a believable setting, and why Orwell chooses to use settings which resemble Trafalgar Square, etc. I would've liked to have seen more focus on the analysis of language, and how it is used to control society. This could've been linked to some contextual points, possibly exploring the propaganda used in World War Two or otherwise. I just feel that looking at the description of the setting and the tele screen, for example, isn't enough to warrant the top marks. Structure is another avenue which examiners are keen to see analysed, and there is no evidence of that being discussed here.

Albeit short, this essay has a strong structure. The introduction ably forms a clear argument, and uses the conclusion to weave ideas together and form a justified judgement. These are important in showing the examiner you are able to form a coherent and focused argument. Paragraphs are concise, meaning there is little repetition. I just feel some ideas could be expanded more! The style here is good, and this essays shows a strong craft in forming a convincing argument. Spelling, punctuation and grammar are fine.