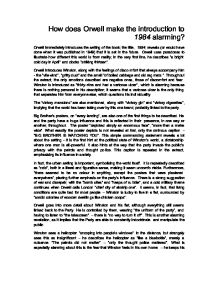 How does Orwell make the introduction to 1984 alarming?

How does Orwell make the introduction to 1984 alarming? Orwell immediately introduces the setting of the book; the title, 1984, reveals (or would have done when it was published in 1949) that it is set in the future. Orwell uses paradoxes to illustrate how different this world is from reality; in the very first line, he describes "a bright cold day in April" and clocks "striking thirteen". Orwell introduces Winston, along with the feelings of discomfort that always accompany him - the "vile wind", "gritty dust" and the smell "of boiled cabbage and old rag mats". Throughout the extract, the only emotions described are negative ones, those of discomfort and fear. ...read more.

This simple commanding statement reveals a lot about the setting - it is the first hint at the political state of Winston's world, a dictatorship where one man is all-powerful. It also hints at the way that the party invade the public's privacy with the patrols and thought police. This caption is repeated in the extract, emphasising its influence in society. In fact, the urban setting is important, symbolising the world itself. It is repeatedly described as "cold", both in a literal and figurative sense, making it seem uncomfortable. Furthermore, "there seemed to be no colour in anything, except the posters that were plastered everywhere", placing further emphasis on the party's influence. ...read more.

"The patrols did not matter" - "only the thought police mattered". What is especially alarming about this is the fear that Winston feels in his own home - he keeps his back to the telescreen because "it was safer" - and the idea that the government are controlling and policing even people's thoughts. Finally, the extract ends with another paradox - the slogans of the party. "WAR IS PEACE, FREEDOM IS SLAVERY, IGNORANCE IS STRENGTH". This seems strange; the first two are completely contradictory, since the words have opposite meanings - the party are advocating war and ignorance, while refuting freedom. What is alarming about this is that, while a political party should be doing what the people want it to, this one tells the people what to want. ?? ?? ?? ?? ...read more.

This essay engages well with the task, looking beyond the plot to the techniques Orwell uses to make the opening alarming. There is a clear awareness of how structure becomes important in making the novel seem alarming, and I like ...

This essay engages well with the task, looking beyond the plot to the techniques Orwell uses to make the opening alarming. There is a clear awareness of how structure becomes important in making the novel seem alarming, and I like how there is a balance between analysis of language, setting and structure. This shows that the candidate is able to discuss a breadth of topics contributing towards a convincing argument. Although the essay makes it implicit that they are referring to the reader when saying "it is alarming", I would've made the reader response more prominent. Phrases such as "this technique forces the reader to question" or similar would show the awareness that the audience response is the most significant part here. If I were answering this question, I would've discussed in a conclusion why Orwell chooses to have the first chapter become alarming, looking how it sets up the rest of the novel and its significance.

The analysis here is strong. What I particularly like about this essay is that quotes aren't just used, they are always analysed. For example they mention the "gritty dust" but go further to say that the only language used in the passage is negative. I would have liked to have seen the essay go that bit further with each point. After saying the language is of discomfort and fear, I would make an explicit reference to the question and say this makes it alarming. It was nice to see the paradoxes discussed, as this is a clear technique Orwell uses in his famous opening. Once again, the essay could've discussed how the surreal world affects the reader. The analysis here is fluent, and I put this down to the way they address the plot and its characters. Rather than saying "Winston is mundane" the essay writes "Orwell introduces Winston" showing the understanding that he is a construct. Once this foundation is built, this naturally forces the essay into discussing the effect of techniques and why they are used, and this is why the analysis is strong here.

The essay doesn't have the clearest of structures. For example, the first paragraph jumps straight into a point rather than forming a coherent argument. There isn't a conclusion to weave together the points or make a justified judgement of why the opening is significant. It is a conclusion where the final marks can be gained, and I would always advise making a new comment in one! Some of the paragraphs seem to be a bit short, so I would recommend trying to gather some of the points together. Spelling, punctuation and grammar are strong and the style is good.