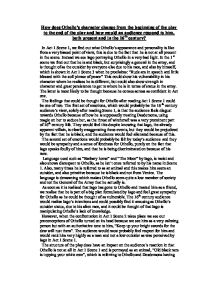 How does Othello's character change from the beginning of the play to the end of the play and how would an audience respond to him, both present and in the 16th century?

How does Othello's character change from the beginning of the play to the end of the play and how would an audience respond to him, both present and in the 16th century? In Act 1 Scene 1, we find out what Othello's appearance and personality is like from a very biased point of view, this is due to the fact that he is not at all present in the scene. Instead we see Iago portraying Othello in a very bad light. In the 1st scene we find out that he is and black, but surprisingly a general in the army, and is thought of as the outsider by everyone else due to his race, and also by himself, which is shown in Act 1 Scene 3 when he proclaims: "Rude am in speech and little blessed with the soft phrase of peace" This could show his vulnerability in his character where he realises he is different, but could also show strength in character and great persistence to get to where he is in terms of status in the army. The latter is most likely to be thought because he comes across as confident in Act one. The feelings that could be thought for Othello after reading Act 1 Scene 1 could be one of two. The first set of emotions, which would probably be the 16th century audience's view, solely after reading Scene 1, is that the audience feels disgust towards Othello because of how he is supposedly treating Desdemona, using magic on her to seduce her, as the threat of witchcraft was a very prominent part of 16th century life. ...read more.

The modern audience would be thinking that Othello is a fine soldier, but since his marriage with Desdemona, her influence has caused his judgement to fog slightly and he is being rash at times and it is probably felt that Desdemona is a bad influence. The 16th century audience, based on the fact that he is different, being black, may feel glee that Othello is falling for Iago's plan and knowing that Othello is going to come out worse. The loss of cool and calm-headedness give reason to believe that Othello is going to make a very grave mistake. In Act 3 Scene 3 we see Othello's character change many times, and this scene is the most important and longest scene in the book. Iago is seen as exploiting every little thing he can twist in his favour, and does it so skilfully that it is made to seem like the characters are simultaneously acting under their own free will and as Iago's puppets. At the beginning of Act 3 Scene 3 Othello has the doubt of Desdemona and Cassio having an affair, but does still trust her. However, when he sees Cassio hastily leave the company of Desdemona, Othello must feel a definite feeling of anxiety over the suspicion that they may be having an affair. When Othello and Desdemona first speak in the scene, she is being rather demanding, by pressuring him to go and speak to Cassio. This will inevitably place more doubt in Othello's mind, but tries not to show it, by evading her proposed meeting with Cassio. ...read more.

The 16th century audience will see that Othello only sees black and white, as in Iago claims to have seen Cassio with his wife's handkerchief, so therefore they must be having an affair, and there is no other possible explanation, and this is in direct relation with him being the only black person in that 16th century society. In Act 3 Scene 4 and Act 4 we see Othello interrogating Emilia and Iago for more information and of course Iago is more than willing to grant him this information. Also he is still very cold with Desdemona and in Act 4 Scene 1 he slaps her in front of all her family. Also in Act 4 Scene 1 we see Iago very cleverly manipulating a situation to make Othello think that Cassio is laughing about his sexual relationship with Desdemona. We see Othello becoming more and more insane, and is seen to be set on one goal ridding the world (or at least his own personal world) of Cassio and Desdemona. Even Lodovico is amazed by Othello's sudden surge of anger and slapping of Desdemona: "Are his wits safe". By Act 5 we see that murder is going to take place and in Act 5 Scene 1 we see that Iago's malicious nature has persuaded Roderigo to kill Cassio. However, it is Roderigo who is slain. In Act 5 Scene 2, the final scene of the book we see Othello approaching Desdemona whilst she is asleep. She awakes, which is not what Othello wants and his emotions towards her are thrown into turmoil. ...read more.