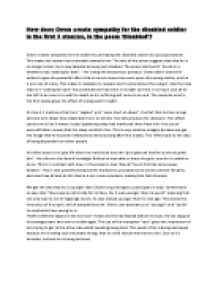 How does Owen create sympathy for the disabled soldier in the first 3 stanzas of the poem Disabled?

﻿How does Owen create sympathy for the disabled soldier in the first 3 stanzas, in the poem ?Disabled?? Owen creates sympathy for the soldier by portraying the disabled soldier as a young character. This makes the reader feel vulnerable towards him. The title of the poem suggests that that he is no longer a man; he is now labelled as being just disabled. The poem starts with "He sat in a wheeled chair, waiting for dark", "He" being the anonymous pronoun. Owen didn't name the soldier to give the powerful effect that so much misery has come upon this young soldier, and he is just one of many. ...read more.

This effect carries on to line 6 where it says "gathering sleep had mothered them from him" this use of personification means that the sleep comforts him. This is very emotive imagery because we get the image that he has been infantilised needs looking after like a baby. This refers back to the idea of being dependent on other people. He refers back to his past life when he reminisced how the "girls glanced lovelier as the air grew dim". He refers to the idea of nostalgia. Before he was able to chase the girls, now he is unable to do so. This is in contrast with now, in the present, how they all "touch him like some queer disease". ...read more.

This shows the innocence of his youth, which sympathises him. Owen uses assonance on "younger" and "youth" to emphasise how young he is. "Half his lifetime lapsed in the hot race" means his life has flashed before his eyes. He has skipped his teenage years and now is middle-aged. The use of the metaphor "race" gives the impression of him trying to get to the other side whilst avoiding being shot. This youth of his is being destroyed because he is seeing such traumatic things, that no child should ever have to see. Due to his situation, he feels he is being tortured. ...read more.