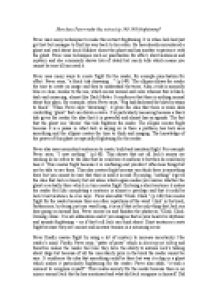 How does Paver make this extract of &quot;Dark Matter&quot;(p.148-149) frightening?

Transfer-Encoding: chunked ﻿How does Paver make this extract (p.148-149) frightening? Paver uses many techniques to make this extract frightening. It is when Jack had just got lost but manages to find his way back to his cabin. He has already encountered a ghost and read about local folklore about the ghost and has another experience with the ghost. Paver uses techniques such as punctuation for effect, short sentences and mystery and she commonly shows lots of detail but rarely tells which means you cannot be sure till you read it. Paver uses many ways to create fright for the reader, for example punctuation for effect. Paver says, ?a black tide drowning?? (p.149). The ellipsis allows the reader the time to create an image and then to understand the terror. ...read more.

Paver also uses many short sentences to create, build and maintain fright. For example Paver says, ?I saw nothing.? (p.148). This shows that not all Jack?s senses are working as he refers to the idea that he could see it and hear it but then he could only hear it. This creates fright because it is confusing and you don?t often hear things but not be able to see them. This also creates fright because you think there is something there but you cannot be sure that there is until it is read. By saying, ?nothing? it gives the idea that Jack is lonely but not alone which again makes you unsure whether the ghost is actually there which in turn creates fright. By being a short sentence it makes the reader feel like completing a sentence is almost a privilege and that it could be Jack?s last sentence he ever says. ...read more.

It reinforces the idea that something could be there but was it a dog or a ghost which makes it particularly frightening for the reader. Paver also adds, ?it took a moment to recognise myself?. This creates anxiety for the reader because there is no mirror around Jack that he has mentioned and what did Jack recognise in himself. Did Jack recognise something emotional rather than physical about himself? What did Jack do in the moments after he ?recognise[d] himself?? This creates fright because you are completely unsure to the situation. In conclusion, Paver?s use of mystery is particularly frightening because even though you are the reader, you are almost fully unaware to the situation and frightened by the facts that you don?t know. ...read more.