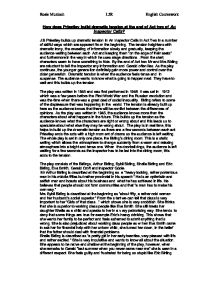 How does Priestley build dramatic tension at the end of Act two of An Inspector Calls?

How does Priestley build dramatic tension at the end of Act two of An Inspector Calls? J.B Priestley builds up dramatic tension in An Inspector Calls in Act Two in a number of skilful ways which are apparent from the beginning. The tension heightens with dramatic irony, the revealing of information slowly and gradually, keeping the audience waiting between each Act and keeping them "on the edge of their seats" and furthermore in the way in which he uses stage directions. From the start, characters seem to have something to hide. By the end of Act two Mr and Mrs Birling are reluctant to tell the inspector any information and Gerald often lies. As the play continues, the younger generation definitely gain more power and control over the older generation. Dramatic tension is when the audience feels tense and in suspense. The audience wants to know what is going to happen next. They have to wait and this builds up the tension. The play was written in 1945 and was first performed in 1946. It was set in 1912 which was a few years before the First World War and the Russian revolution and was the time when there was a great deal of social inequality. ...read more.

It so happens that everyone at the party has a link to her death. In Act two Gerald admits to have known Daisy Renton (Eva Smith). He met her at a variety theatre and rescued her from Alderman Meggarty - a local dignitary. Daisy had no money so Gerald let her stay with him and work as his mistress. He had to go away for work so he left her with some money. Mrs Birling also finally admits that Eva Smith came to ask for financial help, but Mrs Birling turned her down. She refused as she believes that the father should always be there for financial support. They all realise that Eric is involved and the curtain falls. Tension is built as most of the family feel guilty and disturbed. All the characters become different people to who they were at the beginning of the evening. Their evening has changed as a result but so too have their futures. The relationships have changed during Act Two as true feelings and past actions are revealed. The question that is on the audience and the characters' minds is "who is inspector Goole?" The fact that the audience knows nothing about him makes it tense and mysterious. He knows about everyone and what they have done. ...read more.

The audience therefore, feels frustrated and tense like Mrs Birling. Emotions run high continuously throughout Act Two which contributes to the tension. Sheila is the most emotional and the most affected by the circumstances. She is honest to the inspector and is angry at her family for pretending to have nothing to do with the death and supports the inspector instead of her family, whereas at the beginning of the play she did not. Sheila is often silenced by her mother and father and is often patronised. She wants to rebel against her family, with the inspector there she finally can. Stage directions are very important for building atmosphere and suspense. In Act Two, they explain a lot and help the tension build, "Inspector holds up a hand. We hear the front door. Eric enters, looking extremely pale and distressed. He meets their inquiring stares." Dramatic tension is constantly built throughout the play. The audience is constantly in trepidation and suspense. The conflict between characters is constantly changing and the atmosphere changes rapidly; information is gradually revealed and the stage directions build the tension further. These aspects are especially shown at the end of Act Two where the tension seems to be at the highest point in the play. ?? ?? ?? ?? Rosie Murdoch L5R English Coursework ...read more.