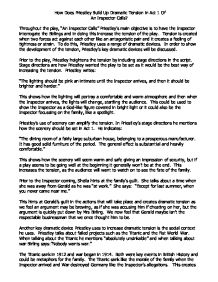 How Does Priestley Build Up Dramatic Tension in Act 1 Of An Inspector Calls?

How Does Priestley Build Up Dramatic Tension in Act 1 Of An Inspector Calls? Throughout the play, "An Inspector Calls" Priestley's main objective is to have the Inspector interrogate the Birlings and in doing this increase the tension of the play. Tension is created when two forces act against each other like an antagonistic pair and it creates a feeling of tightness or strain. To do this, Priestley uses a range of dramatic devices. In order to show the development of the tension, Priestley's key dramatic devices will be discussed. Prior to the play, Priestley heightens the tension by including stage directions in the script. Stage directions are how Priestley wanted the play to be set as it would be the best way of increasing the tension. Priestley writes: "The lighting should be pink an intimate until the Inspector arrives, and then it should be brighter and harder." This shows how the lighting will portray a comfortable and warm atmosphere and then when the Inspector arrives, the lights will change, startling the audience. ...read more.

When talking about the Titanic he mentions "absolutely unsinkable" and when talking about war Birling says:"Nobody wants war." The Titanic sank in 1912 and war began in 1914. Both were key events in British History and could be metaphors for the family. The Titanic sank like the morale of the family when the Inspector arrived and War destroyed Germany like the Inspector's allegations. This creates dramatic tension, as a contemporary audience knows how these events happened and ended in destruction. Priestley then focuses his attention on the in-script stage directions. In-script stage directions are adverbs to tell the actor how to say the text. This can be slowly or quickly, loud or soft. We find out the Inspector is coming due to a "sharp" ring of the doorbell. Everyone, especially Eric, becomes uneasy and Mr Birling becomes rather angry. Priestley writes; Eric (who is uneasy, sharply) and Birling (sharply, staring at him) This increases the tension as the audience notices this change in the characters speech. ...read more.