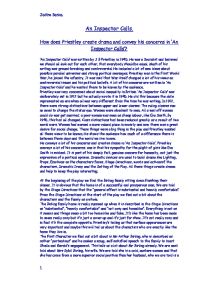 How does Priestley create drama and convey his concerns in 'An Inspector Calls'?

An Inspector Calls. How does Priestley create drama and convey his concerns in 'An Inspector Calls'? 'An Inspector Calls' was written by J B Priestley in 1945. He was a Socialist and believed we should all look out for each other, that everybody should be equal. Much of his writing was ground-breaking and controversial. He included a lot of new ideas about possible parallel universes and strong political messages. Priestley was in the First World War, he joined the infantry. It was said that War itself changed a lot of his views on controversial issues and his political beliefs. A lot of his concerns are written in 'An Inspector Calls' and he wanted these to be known by the audience. Priestley was very concerned about social inequality in Britain. 'An Inspector Calls' was deliberately set in 1912 but he actually wrote it in 1945. He did this because the date represented an era when all was very different from the time he was writing. In 1912, there were strong distinctions between upper and lower classes. The ruling classes saw no need to change the status quo. Women were obedient to men. All a well off women could do was get married; a poor woman was seen as cheap labour, like Eva Smith. By 1945, this had all changed. Class distinctions had been reduced greatly as a result of two world wars. Women had earned a more valued place in society and now there was a great desire for social change. These things were a big thing in the play and Priestley wanted all these views to be known. He shows the audience how much of a difference there is between those days and the world we live in now. He conveys a lot of his concerns and creates drama in 'An Inspector Calls'. Priestley conveys a lot of his concerns; one is that his sympathy for the plight of girls like Eva Smith is evident. ...read more.

You have to wait throughout the course of the whole play to find out what each character has done to play a part in the suicide. This raises the drama and creates suspense. The stage directions are important in helping us to imagine exactly what is going on; they can help us picture each character's actions and reactions. This creates a lot of drama in itself. There are subtle hints that all is not as it seems. For example, early on we wonder whether the happy atmosphere is slightly forced. Sheila wonders where Gerald was last summer, Eric is nervous about something, Lord and Lady Croft did not attend the engagement dinner. This creates interest in the audience because we are waiting to find out what is going on. There is a lot of tension as each member of the family is found to have played a part in Eva's death. New pieces of information keep appearing and a lot of suspense is created along with a lot of drama. The audience is interested in how each character reacts to the accusations against them. Timing of entrances and exits is crucial in this and Priestley has done it very skilfully. For example, the Inspector arrives immediately after Birling has told Gerald about his impending knighthood and about how "a man has to look after himself and his own." This makes it quite ironic as this all changes later on. The ending of 'An Inspector Calls' leaves the audience on a cliff-hanger. The Birlings believed themselves to be off the hook when it was discovered that the Inspector wasn't real and that no girl had died in the infirmary from suicide. This releases some of the tension. But then they get a final telephone call, announcing that a real inspector is on his way to ask questions about the suicide of a young girl. This suddenly restores the tension very dramatically. It is an unexpected final twist and adds a great deal to the drama. ...read more.

This shows that a lot of the characters have changed for the better, mostly Sheila. The girl's death gets to her a lot and she feels really to blame. Later in the play she becomes more and more distressed. This is a radical change from the start of the play when everyone is happy and carefree. It is obvious she has changed at the end of the play. Sheila and Eric seem to be the only two who actually take responsibly and take in what the Inspector has told them, the inspector has had the most effect on them. Gerald also changes at one point. He seems quite different later on compared to act one, you get the impression that he's very manly and strong willed at the start. He seems very cool, slick and laid-back. He speaks very confidently and doesn't seem very shy in the slightest but once interrogated by the Inspector, he seems to break. We see this when he asks to go outside for some air. Priestley is trying to get his concerns across that the wealthy are selfish and ignore and neglect the needs of the poor majority that need it, like Mr and Mrs Birling. There is a lot of meaning in Mrs Birling's comment, "I must say, we are learning something tonight." She is meaning it in the fact that they are learning lots of secrets about others like Gerald's disloyalty and Alderman Meggarty's drinking and womanising. There is a double meaning behind that quote because not only are they learning things about others but they are also learning a great deal about themselves as the Inspector strips away their surface of respectability. It makes us feel, from the audience perspective that it's not only the Birlings on trial but the whole of our society. The Inspector is very moralising and its like he's trying to teach everyone reading the play 'An Inspector Calls' a lesson in responsibility and caring for everyone around you. ?? ?? ?? ?? Jadine Banks. 1. ...read more.