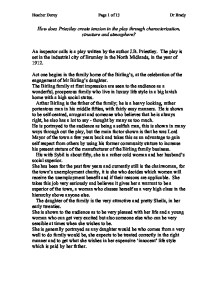 How does Priestley create tension in the play through characterisation, structure and atmosphere?

How does Priestley create tension in the play through characterisation, structure and atmosphere? An inspector calls is a play written by the author J.B. Priestley. The play is set in the industrial city of Brumley in the North Midlands, in the year of 1912. Act one begins in the family home of the Birling's, at the celebration of the engagement of Mr Birling's daughter. The Birling family at first impression are seen to the audience as a wonderful, prosperous family who live in luxury life style in a big lavish home with a high social status. Arthur Birling is the father of the family; he is a heavy looking, rather portentous man in his middle fifties, with fairly easy manners. He is shown to be self-centred, arrogant and someone who believes that he is always right, he also has a lot to say - thought by many as too much. He is portrayed to the audience as being a selfish man, this is shown in many ways through out the play, but the main factor shown is that he was Lord Mayor of the town a few years back and takes this as an advantage to gain self respect from others by using his former community stature to increase his present stature of the manufacturer of the Birling family business. His wife Sybil is about fifty, she is a rather cold woman and her husband's social superior. She has been for the past few years and currently still is the chairwoman, for the town's unemployment charity, it is she who decides which women will receive the unemployment benefit and if their reasons are applicable. She takes this job very seriously and believes it gives her a warrant to be a superior of the town, a woman who classes herself as a very high class in the hierarchy above anyone else. The daughter of the family is the very attractive and pretty Sheila, in her early twenties. ...read more.

Tension is created by Sheila having a little dig every now and then at Gerald, even though he still admits that she became his mistress, but that he didn't love her. The Inspector delves deep into Gerald's story; he asks when exactly the affair ended and how she took the news of the ending relationship. Gerald replies: "Better than I hoped. She was - very gallant - about it." Sheila takes this chance to cause tension to try and make Gerald feel even worse than he does by being cocky and replying to Gerald's answer to the inspectors question speaking with irony; "That was nice for you." The inspector also asks weather Eva had said to Gerald what her proposals were as she was to leave the flat, but as it was Gerald did not know but suspected she was leaving Brumley. Gerald and The Birling's learn that she went to a seaside resort by herself for a few months, at this Gerald says that he never saw her again, and that he wants to be alone for a while and that he will return. Sheila causes tension once again as Gerald asks the inspectors permission to go out for a walk, and Sheila hands Gerald her engagement ring and says; "I don't dislike you as I did half an hour ago, Gerald. In fact, in some odd way, I rather respect you more than I've done before." She makes it clear that they have to get to know each other again. Gerald leaves implying that there is to be much more of this 'wretched business' of this young girl's death as the whole of the Birling family watch him go in silence causing tension for the audience. At this point Mrs Birling realises that the inspector has a photograph of this girl and has the opportunity from the inspector to look at it, at first she puts up her defences and does not know why she should have any reason to look at ...read more.

As Eric and Sheila are the younger generation they also learn that the working class should be treated with respect and it is wrong to treat them respectfully. In the play the family have rich and fulfilled lives and 'off-stage' we see into the life of Eva Smith what these lives cost poor people. In real life there is also an 'on stage' and an 'off stage'. The play challenges the audience to realise that they have an 'off stage' in their life too. The play asks the audience just like the inspector asks the characters to think about what our lives cost other people. Sheila's 'finery' is brought at the expense of the poor workers. A modern example of this is like when we purchase products from the third world like coffee or chocolate and we don't care about the lives of the people who slave away in poor conditions producing the products for us. J.B. Priestley challenges the audience just like Inspector Goole challenges the characters in the play. The big question from the author is are we morally blind to the suffering of the poor and are we aware that much of the pleasure we get from life comes from the exploitation of the poor. At the end of the play things turn out to become very eerie as of the call to Mr Birling, which confuses absolutely all of the characters. J.B. Priestley uses inspector Goole as a catalyst towards the Birling family, he is meant as a dramatic device deliberately used by the author to explore his ideas. This is meant to make the family come to a realisation of that poorer people than themselves are actually people with true feelings, and the telephone call at the end warning them that a inspector is about to arrive with questions as to a suicide will reveal weather they have learnt anything about the poorer than themselves. Heather Dorey Page 1 of 13 Dr Brady ...read more.