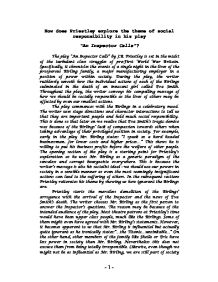 How does Priestley explore the theme of social responsibility in his play An Inspector Calls?

How does Priestley explore the theme of social responsibility in his play "An Inspector Calls"? The play "An Inspector Calls" by J.B. Priestley is set in the midst of the turbulent class struggles of pre-First World War Britain. Specifically, it chronicles the events of a single night in the lives of the prosperous Birling family, a major manufacturing employer in a position of power within society. During the play, the writer ruthlessly unveils how the individual actions of each of the Birlings culminated in the death of an innocent girl called Eva Smith. Throughout the play, the writer conveys his compelling message of how we should be socially responsible as the lives of others may be affected by even our smallest actions. The play commences with the Birlings in a celebratory mood. The writer uses stage directions and character interactions to tell us that they are important people and hold much social responsibility. This is done so that later on we realise that Eva Smith's tragic demise was because of the Birlings' lack of compassion towards others when taking advantage of their privileged position in society. ...read more.

Some of them might even have agreed with Mr. Birling's statements. However, it becomes apparent to us that Mr. Birling is influential but actually quite ignorant as he ironically states:"...the Titanic...unsinkable..." On the other hand, other members of the family like Sheila or Eric have less power in society than Mr. Birling. Nevertheless this does not excuse them from being totally irresponsible. Likewise, even though we might not be as influential as Mr. Birling, we are still part of society and therefore we are all responsible to some degree. By making the play relevant to us, Priestley can better convey his message by letting us realise that when the Inspector interrogates the Birlings, he is really interrogating our consciences and morals. As the Birling family members were questioned, the most prominent behaviour they exhibited was how they persistently tried to pass the blame onto someone else. For example, when accused by the Inspector of being prejudiced against Eva Smith, Mrs. Birling said: "...she had only herself to blame." This is very similar to our behaviour in real life when we are being accused. ...read more.

Even more ingenious is the fact that the family members are also personifications of different vices. For example, Mr. Birling represents greed and selfishness whilst Mrs. Birling symbolises hypocrisy and prejudice. The play showed us, in a small scale, what could happen if these vices rampage unchecked. Before the arrival of the Inspector, not one of the Birlings thought their actions would bring about the demise of Eva Smith. Indeed, Sheila Birling even thought "...she [Eva Smith] was very pretty and looked as if she could take care of herself." Ironically, Sheila was sadly mistaken. This shows how uncaring people can be and also sometimes those who are in power disdainfully take their privileges for granted. The play also mirrors the selfish actions we take for granted in our own lives. For example, like the Birlings we frequently dissipate blame onto someone else instead of accepting our errors. This makes Priestley's theme of social responsibility highly applicable for all time. In short, Priestley chronicled a single case of the neglect of social responsibility. Through it, he showed us the importance of being mindful of others. ?? ?? ?? ?? - 1 - ...read more.

This is a very well written essay, with excellent expression and concise comments. I would like to see further textual references and as it is a play that is being analysed consideration of the stage directions should be present.
4 Stars