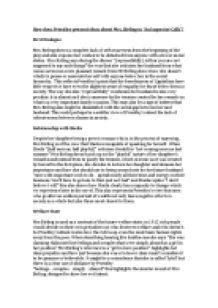 Transfer-Encoding: chunked ﻿How does Priestley present ideas about Mrs. Birling in ?An Inspector Calls?? First Dialogue Mrs. Birling shows a complete lack of self-awareness from the beginning of the play and also exposes her wishes to be detached from anyone with a lower social status. Mrs. Birling says during the dinner ?(reproachfully) Arthur you are not supposed to say such things? the way that she criticises her husband from what comes across as a rare pleasant remark from Mr Birling shows how she doesn?t which to praise or associate her self with anyone below her in the social hierarchy. This reflects Priestley?s point that the beneficiaries of Capitalism have little respect or have even the slightest sense of empathy for those below them in society. The way she also ?reproachfully? condemns her husband is also very peculiar, it is almost as if she is unaware by the tension created by her remark on what is a very important family occasion. ...read more.

When describing hearing Eva Smiths case she says ?She was claiming elaborate fine feelings and scruples that were simply absurd in a girl in her position? Mrs Birling?s reference to a ?girl in here position? highlights her class prejudice and how just because she was of a lower class wasn?t considered to be genuine or believable. It might be a coincidence that she is called ?Sybil? but there is a clear use of sibilance by Priestley ?feelings?scruples?simply?absurd? this highlights the sinister sound of Mrs Birling, designed to show her evil intent. Irony Priestley also highlights the hypocrisy of Mrs Birling, when she is referring to Eva Smiths case. Mrs Birling describes ?the elaborate fine feelings and scruples which were simply absurd? shows a strong sense of irony. Mrs Birling refers to Eva?s feeling of elaborate, and then she attempts to use the most advances vocabulary she can ?ridiculous airs?scruples?absurd? to disguise her snobbery and prejudice. Her clear discrimination of the lower class is displayed when she tells the inspector ?As if a girl of that sort would ever refuse money!? The demeaning labelling of her as a ?girl? rather than a woman shows how superior she feels. ...read more.

Sheila comment of ?don?t you see? is a metaphor, not only does it suggest Mrs Birling doesn?t understand but also referencing to Mrs Birling blindness and lack of thoughts. Mrs Birling?s further throwaway remark ?you?re behaving like a hysterical child tonight? again is another example of her completely misreading of the situation as in fact Sheila is quite intelligent in her evaluation that the father of the son must be Eric. Conclusion Overall, it is quite clear that Mrs Birling (much like her husband) is a perfect example of the ills capitalism and what needs to change. Priestley would like a society where the state provides welfare to those who need it, not by the prejudices of the rich. A society where money isn?t what epitomizes success but people ability to care after one and other. As suggested by Inspector Goole ?We are one body. We are responsible for one another? shows how each specific character has a clear simplistic purpose. For Mrs Birling it?s to be symbolic of the greediness that capitalism involves. ...read more.