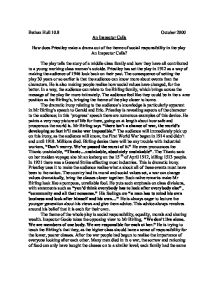 How does Priestley make a drama out of the theme of social responsibility in the play An Inspector Calls?

Bethan Hull 10.8 October 2000 An Inspector Calls How does Priestley make a drama out of the theme of social responsibility in the play An Inspector Calls? The play tells the story of a middle class family and how they have all contributed to a young working class woman's suicide. Priestley has set the play in 1912 as a way of making the audience of 1946 look back on their past. The consequence of setting the play 30 years or so earlier is that the audience can know more about events than the characters. He is also making people realise how social values have changed, for the better. In a way, the audience can relate to the Birling family, which brings across the message of the play far more intimately. The audience feel like they could be in the same position as the Birling's, bringing the theme of the play closer to home. The dramatic irony relating to the audience's knowledge is particularly apparent in Mr Birling's speech to Gerald and Eric. Priestley is revealing aspects of the character to the audience; in this 'progress' speech there are numerous examples of this device. He paints a very rosy picture of life for them, going on at length about how safe and prosperous the world is. ...read more.

For example, at Mr Birling's remark about how the Inspector has made a "mess" of their "nice little family celebration", the Inspector retorts that when he saw what was left of Eva Smith he thought "a nice little promising life there" and "a nasty mess somebody's made of it." He has thrown Mr Birling's anger back in his face, making him realise how petty he seems. Furthermore, the Inspector can always outwit the Birling's, especially Mr Birling. The Inspector will always take the opposing view to Mr Birling and get the last word, pointing out to Mr Birling that "its better to ask for the world than to take it." Eva is cleverly and symbolically named. Priestley has set her up as the archetypal lower class woman. The name Eva is a form of Eve, i.e. Adam and Eve, representing the first and only woman, so she represents the entire female sex. Smith is a common name; therefore she belongs to the lower classes. Eva is the key of the play, the topic of conversation and the reason for the investigation. Most importantly, she is used to evoke emotion from the audience and characters. She binds everything and everyone together. Bethan Hull 10.8 Sheila, for very little reason gets Eva sacked from the job she loved. ...read more.

Finally, the story told through the investigation, the mystery concludes with the confrontation of the murderer and order is restored. An Inspector Calls is similar to a murder mystery; there is a body, evidence, an inspector and several suspects. The audience would be familiar with a traditional murder mystery so this element of the play would appeal to them. However, it is also different, due to one key fact. Eva Smith committed suicide; she was not murdered. Also, the guilt is not pinned on one person; the Birling's and Gerald share the guilt and blame. The Birling's actions were not illegal, but were immoral. Though none of them actually committed a crime, it was a combination of what they all did that lead to Eva taking her own life. Within the family, things do not return to normal; they have to live with what they did. Priestley's intentions would have been that the plight of the Birling's would make people aware of how their seemingly insignificant actions can affect others. In other words, they have a responsibility to the whole of society, not just themselves and their family. In conclusion, Priestley has successfully made a drama of social responsibility. Although this play is not action packed, it is thought provoking. It is designed to deliver a message, in an entertaining way, which it has successfully done. This play is a classic and will always be admired by its audience. ...read more.